The tournament was organised by Steve Ford, friend and colleague of Giles Staines, contracts manager for Kier Living.  Giles and his partner Jackie had a beautiful baby girl, Bethany, in September 2014, who due to problems after her birth had to spend some time in SCBU. 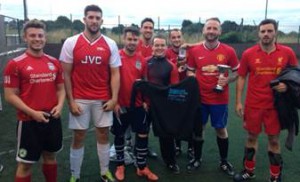 Giles said:  “The staff at Torbay Hospital were amazing and really helped us through that difficult time.  Bethany is now almost a year old and doing great.  Jackie and I wanted to do something to thank the hospital, and the football tournament suggested by Steve was the perfect solution.  He did a great job of organising the event and making it such a success.”

Several subcontractors entered teams for the world cup style tournament which raised £611 on the day.  A further £1,000 was added to this sum by the Kier Foundation making a total donation of £1,611. The winning team, Beaumont Dry Lining, was presented with the Kier South West Charity Cup. 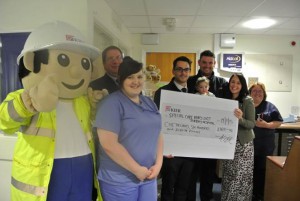 Sandy Discombe, Ward Manager for SCBU, said:  “On behalf of the Special Care Baby Unit, I would like to say a huge thank you to Kier for this really generous donation.  The team said how lovely it was to see Bethany looking so well and happy when they came to hand over the cheque. The money raised will be used towards creating a living room with kitchen facilities for the parents of our sick babies.”