Members of the public can dispose of unwanted knives at designated police stations without fear of prosecution.

Devon & Cornwall Police are supporting the week of action, with runs from 11th – 17th March as part of the ongoing national Operation Sceptre which has the aims of combating knife crime and raising awareness about it.

Most police stations or enquiry offices which are open to the public will have collection bins in which members of the public can deposit items anonymously. The local police stations covering the South Devon area taking part are:  Plymouth, Crownhill and Plymouth Charles Cross; Exeter, Heavitree Road and Torquay, South Street.

Knives of any description can be disposed of including illegal lock knives and “zombie” knives, samurai swords, kitchen knives, unwanted collectibles, replicas and ceremonial items. 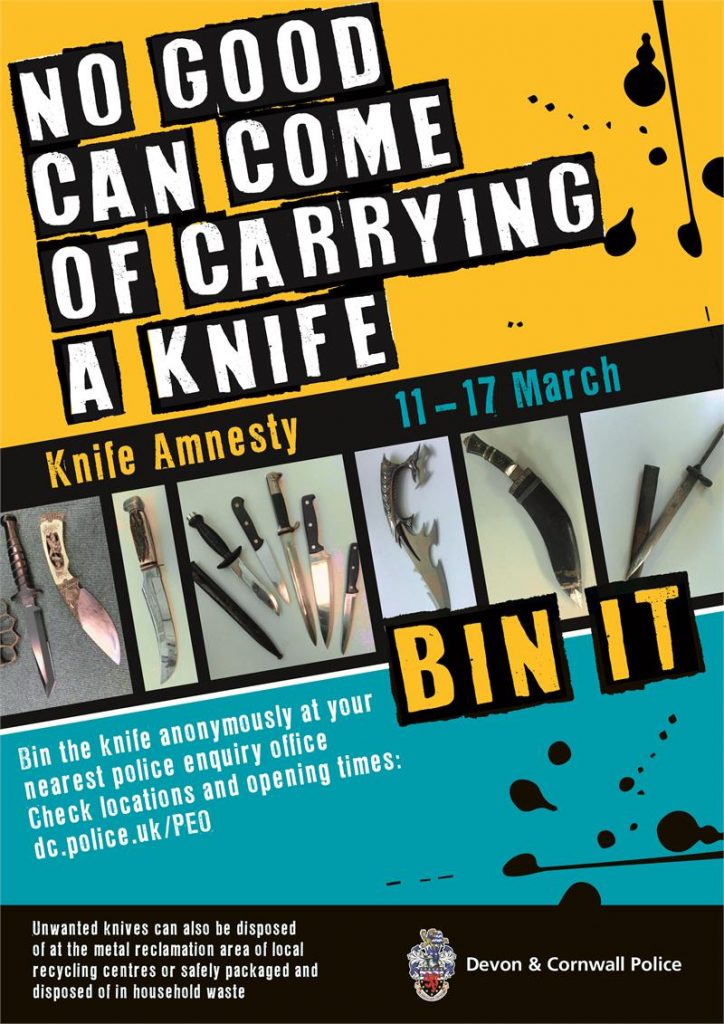 Superintendent Jeremy Capey said: “Here in Devon and Cornwall we do not have the extent of knife crime reported in some major metropolitan areas of the country. Carrying of knives by young people is not endemic in our policing area, and instead tends to be associated with criminal gang activity such as county lines drugs supply which is already actively targeted.

“We are holding the knife amnesty as part of our ongoing local approach to focussing upon prevention. Any knife taken out of circulation and off the street helps to prevent injuries and deaths.

“Carrying a knife is illegal and incredibly dangerous. People who carry knives for no good reason risk arrest, and the notion of self-defence is not a good reason. If a knife is used in a confrontation the balance of probability is that the person carrying it is more likely to be injured from it themselves.”

Alison Hernandez, Police and Crime Commissioner for Devon and Cornwall, said: “The latest Office of National Statistics (ONS) figures show that Devon and Cornwall is the sixth safest police force area out of 43 when it comes to knife crime, and we all have a duty to keep it that way.

“We must never be complacent about knife crime. I’d urge anyone who thinks they need to carry a knife to reflect on recent tragedies, to remember that this part of the world is safer than most, and to take advantage of this opportunity to do something positive and get rid of it in a responsible way.”

“Anyone who worries that a friend of relative is carrying a knife for no good reason can contact the police and let them know. Alternatively, you can contact Crimestoppers completely anonymously on 0800 555111.”

The law on knives, banned weapons and legitimate reasons for carrying a knife can be found on the Government’s website here: www.gov.uk/buying-carrying-knives

Advice for young people aged 11-14 about carrying weapons can be found here: www.devon-cornwall.police.uk/youth/11-14/yrspace/weapons

Please check online for locations and opening times before you make your journey: www.dc.police.uk/PEO