Lemonfest announce line up for 2016 event

LEMONFEST has announced the line up for this year’s event.

Lemomfest is a one-day music festival taking place in the heart of Devon at
Newton Abbot’s Racecourse every summer, with live music and DJ’s across six
stages.

This year’s festival will be held on the 4th June and promises to be their best
year yet. With previous years welcoming the likes of BRIT award winner Ben
Howard, alternative pop rock trio The Subways and reggae greats Gentleman’s Dub Club, 2016’s impending first line up announcement is sure to have tickets flying out the door.
LEMONFEST is pleased to reveal the first wave of acts for 2016.. 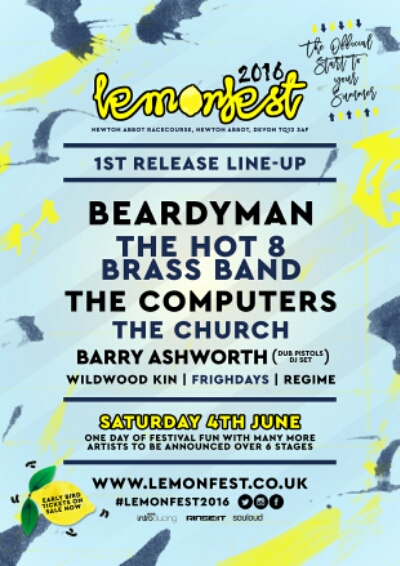 Here’s what was said about last year’s event:
“A temptingly cheap, but tasty one-dayer” – The Telegraph

“It was so much more than I’d imagined, right from the moment we arrived…” –
eFestivals

Other acts confirmed for 2016 are, BARRY ASHWORTH (DUB PISTOLS), THE CHURCH, WILDWOOD KIN, FRIGHDAYS and REGIME.

For more information go to:
www.lemonfest.co.uk

Or join Lemonfest on social media:

Charity shop with a difference gets a makeover

Charity shop with a difference gets a makeover