Thousands of people have become lonely during the Pandemic, missing day to day contact with people, particularly those who live alone.

Next week is Loneliness Awareness Week, which aims to raise awareness about loneliness and encourage people to talk about it to remove the stigma and shame surrounding it.

For many single people of all ages, the lockdowns have been tough, and they have struggled with the consequences of not seeing anyone else for sometimes for days, weeks and months at a time.

Tony Satchwell was successfully putting his life back together after the 12 years of excruciating loneliness that followed the death of his partner of 45 years, Vince.

It left the once outward going former florist afraid to ask for help and left him fearful of going into cafés, bars and restaurants by himself for fear of being thought of as the sad, lonely old man sat by himself.

It wasn’t until he plucked up the courage to speak to someone about his plight that things began to change and once again, it was words that made all the difference.

He often walked past the Age UK Torbay offices in Dendy Road, in Paignton on his daily solo trip to the shops but convinced himself that they were for older, sadder, lonelier people than himself 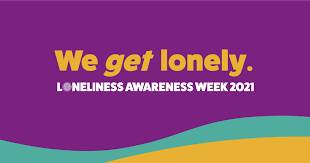 “I do not know where I got it from, but I was sure they were there to help other people; they were not there for the likes of me,” he remembers with a wry smile, “How wrong could I be?”

He still fights back the tears as he remembers that first encounter when he walked in, and in his own words, blurted out: ‘I am very, very lonely, and I don’t know what to do..’

“I was afraid how they would react, that they might dismiss me and look down their noses. How wrong could I be.”

“It meant that someone was interested in me. They were prepared to come to my home and take an interest in me. That changed my life.”

Tony, who lives in a flat in Paignton, was getting things together and joined social clubs across the Bay, but all that dried up when COVID struck and we went into the first lockdown.

“Throughout the Pandemic, we have heard a lot about the people on the front line and the politicians. But there has been little about those that have been forced to endure it alone,” he said.

Tony was one of the lucky ones who had the continued support of AgeUK Torbay, whose wellbeing coordinator, Gwen Price, regularly contacted him by phone.

“From a mental health point of view, it was great to know that there was someone on the end of the phone and that they understood what I was going through,” he added.

“Without AgeUK, I have to be honest; I do not know what would have happened. Gwen has been a lifeline.”

Even when Tony forced himself to go out for daily exercise and to pick up essentials such as milk and bread, there were reminders of the Pandemic everywhere – no small talk, face masks and deserted streets.

“I found myself rushing back to the safety of home, but that just meant more hours and days by myself.

“It was tough and I know I have not been alone. A lot of people, particularly older people, have struggled with this.”

“I just had to think you can handle this; Vince would want you to handle this.”

Another casualty of the various lockdowns was Tony’s planned 80th birthday celebrations that should have been marked with a coach trip with others to Blackpool. Instead, it was home alone.

But he plans to revive the plan as soon as he is able and is looking forward to the AgeUK lunches starting again when they can.

“I just want to be able to go out, sit down next people over coffee or with food and have a good old chat.”

And in that, Tony is not alone.

If you would like to contact the Age UK Torbay Torbay wellbeing coordinators, call 01803 555181 or email wellbeingcoordinator.torbay@nhs.net

If you want to know more about what is going on in your area, contact your Ageing Well community builder by ringing 01803 212638 or email ageingwell@torbaycdt.org.uk