Councillor Tony Colwill, has completed 50 years as a Parish Councillor in Scoriton, on the edge of Dartmoor, with about 20 of those serving as Chairman.

Scoriton Village Hall saw about 35 parishioners attend the Annual Parish Meeting on 5 April. They had come to show their appreciation to the dedicated Parish Councillor to commemorate his outstanding commitment to public representation. 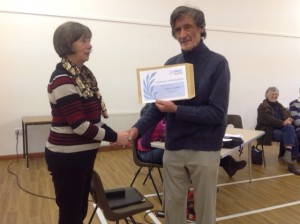 Scoriton Parish Council arranged for Cllr Colwill to receive a certificate to award his long service from the Devon Association of Parish Councils (DALC). The certificate was presented by Cllr Gay Hill, Chair of DALC’s Small Parish Group.   The current Parish Council Chairman, Cllr Simon Brent, paid tribute to Tony’s depth of knowledge of the history of the Parish and surrounding area, built up over his 50 years, and his willingness to work for the good of the whole community.

Tony lives at Scoriton Farm, situated right at the heart of the village, where he keeps a dairy herd with his wife Sue, also a Parish Councillor.

South Hams District Councillor, Cllr Peter Smerdon, who attended the meeting, said: “A lot of Parish Councillors don’t see out 5 years, let alone 50!  This is a huge achievement for Tony and I wish him many congratulations.”