Paignton Zoo Environmental Park has bred a Critically Endangered frog for the very first time – by making it rain….

Keepers from the charity’s Lower Vertebrates and Invertebrates Department used artificial rainstorms to help set the mood for the lemur leaf frog, a species found mainly in the rainforests of Costa Rica and Panama. 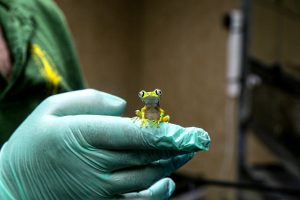 Paignton Zoo is one of only four collections in the UK working with this species. Keeper Andy Meek, from the Lower Vertebrates and Invertebrates Department, explained: “We have a total of 18 tadpoles, a number of which have now become full froglets. We also have 10 adults. The species is Critically Endangered. There is a studbook currently being set up to manage this species in Europe. This is a first for Paignton Zoo, so I’m really pleased.”

The keepers prepared a rain chamber using a water pump and a timer system to make it rain every few hours during the day. The rainfall and the humidity together helped to replicate the sort of conditions the frogs would encounter at the start of the wet season, which is when they breed.

This is a tiny but welcome success in the face of the huge extinction crisis facing amphibians.

The lemur leaf frog (Agalychnis lemur) is a slender, lime-green frog with bulging eyes and no webbing on hands and feet. It is a nocturnal tree frog associated with sloping areas in humid lowland and montane primary forest. The eggs are usually deposited on leafs; the larvae wash off or fall into water.

This endearing little frog has a trick up its sleeve – it can change colour. Light green during the day, it turns a less obvious reddish-brown at night when it is active.

It was once considered to be reasonably common in Costa Rica, but most populations have now disappeared. The huge declines are probably due to the chytrid fungus, which is decimating amphibians around the world. Paignton Zoo Environmental Park is a registered charity. For more information go to www.paigntonzoo.org.uk or ring 01803 697500.