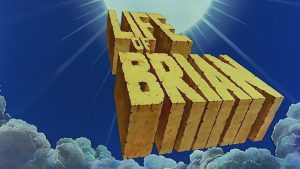 This is the story of how one of Britain’s best movies was inadvertently banned in Torquay for almost three decades.

The 1979 satire Monty Python’s Life of Brian tells the story of Brian Cohen, a young Jewish man who is born on the same day as, and next door to, Jesus and is subsequently mistaken for the Messiah.

The film was a box office success, the fourth-highest-grossing film in the United Kingdom in 1979, and highest grosser of any British film in the United States that year. The movie was named “greatest comedy film of all time” by several magazines and television networks. 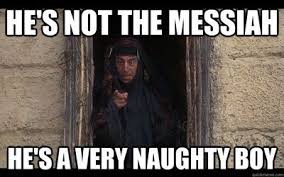 However, the film’s themes of religious satire were controversial attracting accusations of blasphemy and protests from Christian leaders for allegedly lampooning Jesus. Mary Whitehouse, and other traditionalists, picketed locations where the local cinema was screening the film. As a result it gained a certificate for general release only after some cuts were made. 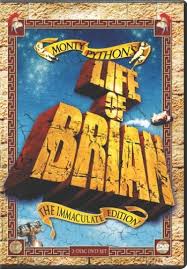 Illustrating the level of anger generated by the film we have the chat show ‘Friday Night, Saturday Morning’ broadcast on 9th November 1979. Hosted by Tim Rice, a debate was held between, on one side, broadcaster and noted Christian Malcolm Muggeridge and Bishop of Southwark Mervyn Stockwood and, on the other, two members of the Monty Python team, John Cleese and Michael Palin. 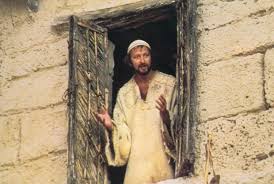 It was later claimed that Muggeridge and the Bishop had arrived 15 minutes late to see a screening of the picture prior to the debate, and so had missed the establishing scenes showing Brian and Jesus as different characters. They therefore believed that the movie was a mockery of Jesus himself. Bizarrely, a role reversal followed with the two comedians attempting to make serious arguments while the Establishment figures engaged in abuse and point scoring:

In New York screenings were picketed by both rabbis and nuns while some countries, including Ireland and Norway, banned it completely with a few of these bans lasting for decades. The opportunistic filmmakers utilised the bans to promote the movie with posters in Sweden reading, “So funny, it was banned in Norway!” in Finland, a text explaining that the film was a parody of Hollywood historical epics was added to the opening credits. 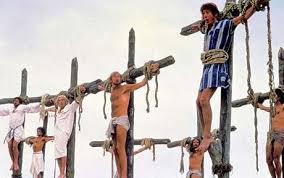 In Britain the film was subsequently shunned by the BBC and ITV, who declined to show it for fear of offending Christians. Thirty-nine local authorities in the United Kingdom either imposed an outright ban, or imposed an X (18 years) certificate, effectively preventing the film from being shown – the distributors said it could not be shown unless it was unedited and carried the original AA (14) certificate.

Life of Brian had a particularly bad reception down here in the South West. The Bishop of Bath and Wells, the Roman Catholic Bishop of Clifton, along with the Methodists and the United Reformed Church, wrote to every council in the West Country urging them to ban it. Even though the Monty Python team insisted that it was a send-up of religious obsession and 1950s Hollywood Bible epics, cinemas that showed the film were picketed and 11 local authorities decided on a prohibition. A further 28 gave it an X certificate which meant that it could be seen only by over-18s. 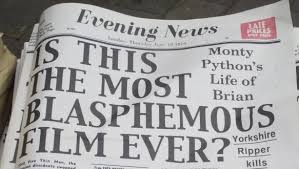 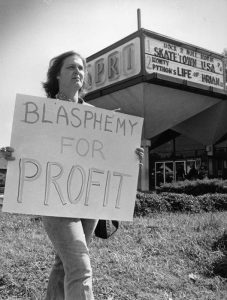 One of these Councils was, of course, Torquay. As the film’s distributors refused to allow it to be shown with an X certificate, ‘Life of Brian’ was effectively banned in Torquay too. For almost three decades the classic satirical comedy remained out of bounds in the Bay. This effective prohibition only seems to have come to light when the organisers of the Bay’s 2008 comedy film festival wanted to show ‘Life of Brian’ and found they couldn’t. They had to get special dispensation after discovering that the film was still on the local authority’s blacklist, 29 years after its release.

Now Life of Brian can be often seen on television, and mostly causes little outrage. On the other hand, even thirty years later, Ann Widdecombe still finds the movie “childish” and “predictable Carry On stuff” and when she saw the crucifixion scene she said: “My soul revolted. How could anybody not find that offensive, Christian or not?” Judge for yourself: