Brixham Harbour was cordoned off this morning after a missile was found. A 100 metre cordon was set up and the Royal Navy Bomb squad attended. 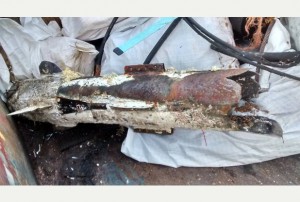 On Twitter Sgt Tim Perrin tweeted: “Missile not live and nothing other than this crab found in the casing!”

@BBCDevon Missile not live and nothing, other than this crab, found in the casing! pic.twitter.com/jnxJWZdycM