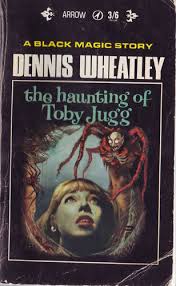 Just before the outbreak of the Second World War the notorious occultist – and sometime Torquay resident – Aleister Crowley was implicated in a bizarre series of accusations regarding Satanism and communism in Totnes. The story begins with the biography of the author Dennis Wheatley.

Dennis Wheatley’s (1897-1977) huge output of thrillers and occult novels made him one of the world’s best-selling writers from the 1930s to the 1960s. His Gregory Sallust series was one of the main inspirations for Ian Fleming’s James Bond stories.

Wheatley’s right-wing politics are evident in his many novels. His main characters are all enthusiasts for Royalty, Empire and class system, with the bad guys usually critics of the established order.

In 1948 Wheatley published ‘The Haunting of Toby Jugg’, a psychological and occult thriller which used his usual themes of satanic possession and madness.

The narrative tells of Toby, a disabled British airman recovering from his experiences in World War II. Sent to convalesce in a Welsh castle, Toby is haunted by a multiple-legged and evil presence that the young airman comes to believe is the Devil. The man in charge of the castle proves to be a member of a Satanist cult who plagues Toby with manifestations including supernatural spiders.

Here’s the local link. In the book a school is described where children were sent to learn to reject Christianity and embrace Satanism: “There were no classes or teaching in the accepted sense… Every pupil could take whichever subjects he or she liked best… In the recreation hours there were no organised games… the only penalty for not getting up at the usual hour in the morning was that, when you did, you had to make your own bed… In the senior house the sexes were not segregated and everyone had separate cubicles… and there was no bar to a chap visiting a girl’s cubicle or vice versa… we were taught that sex was a normal, healthy appetite similar to a desire for food… We were taught that all religion was a product of the Dark Ages… all the doormats had a crucifix woven into them, so that we trod on it every time we went in or out.”

Wheatley described where he got the idea for the school in his autobiography ‘Drink & Ink’. In 1939 he had written “several chapters of a new book. I had heard about a school in Devonshire which was co-educational and run on ultra-modern lines. The pupils were allowed complete licence to attend classes or not as they liked, lie in bed all day if they wished and even abuse teachers that they disliked. It was rumoured that the pupils were encouraged to attend satanic gatherings in a ruined church nearby. I used the idea many years later in The Haunting of Toby Jugg.”

The object of Wheatley’s fascination and hostility was Dartington Hall School near Totnes.

Dartington Hall School, founded in 1926, offered a progressive coeducational boarding life for 300 pupils. In its early years there was a minimum of formal classroom activity and the children learnt by involvement in estate activities. It had “no corporal punishment, indeed no punishment at all; no prefects; no uniforms; no Officers’ Training Corps; no segregation of the sexes; no compulsory games, compulsory religion or compulsory anything else, no more Latin, no more Greek; no competition; no jingoism.”

Founded by Leonard and Dorothy Elmhirst, the headmaster between 1931 and 1957 was Bill Curry who stated that the “social order must be radically changed” and how the world needed a “new elite”. He wrote two books about the radical experiment, ‘The School’ (1934) and ‘Education for Sanity’ (1947). A story goes that when the Mayor of Torquay visited and asked to see the school chapel, Curry laughed at the very idea.

The school naturally attracted attention and there were rumours of sexual abandon and public nudity. The media promoted stories that local boys would frequent the school’s grounds looking for free sexual encounters.

The school was also seen with suspicion by the Establishment. In June 1938 Captain Arthur Rogers gave an account to Parliament where he reported that children were being taught to dislike their own families. Making a series of wild allegations against the school, he linked the initiative with subversion and the occult – “communism is the invention of Satan”.

Rogers was no impartial observer, however. He was a member of the Imperial General Staff during the Great War and later worked for British military intelligence. In 1942 he became the Chairman of the ’18B Detainees (British) Aid Fund’ – set up to support jailed British Fascists. Before the war he was also a leading member of the Liberty Restoration League. This was a front organisation of the Nordic League, a far right group that operated between 1935 and 1939 that sought to co-ordinate a range of British fascist movements and promote Nazism. After the War he became a member of the National Council of the League of Empire Loyalists founded by A. K. Chesterton. Chesterton – who at one time was the Editor of the Torquay Times – would later establish the National Front. Rogers’ series of bizarre accusations against the school involved communism, Bill Curry and the pro-European Federal Union, our very own Aleister Crowley and black magic. In response the Elmhirsts took legal action. The case ‘The Elmhirsts and the Dartington Hall Trust vs. Lady Alexandrina Domvile and Capt. Arthur Rogers of the Liberty Restoration League’ was settled out of court.

The other defendant in the case had similar Nazi tendencies. Lady Alexandrina Domvile was married to Admiral Sir Barry Domvile, a distinguished Royal Navy officer and First World War veteran. Sir Barry was one of the most high-profile British Fascists to be imprisoned during the war. Closely associated with prominent Nazi leaders in Germany, he was a friend of Mosley and founded ‘The Link’ to promote closer relations between Britain and Germany. Both Lady Domvile and Sir Barry were arrested and detained during the war under Defence Regulation 18B.

Even though the Elmhirsts won their case, the rumours and state interest continued. According to Phil Baker in ‘The Devil is a Gentleman’, his biography of Dennis Wheatley, ‘The Haunting of Toby Jugg’ was written by Wheatley using his inside knowledge of an MI5 investigation titled ‘The Case Against Dartington Hall’. Though it seems the files are closed until 2042, it’s claimed that the report contains allegations of a South Kensington house belonging to the Elmhirsts being used as a ‘Black Magic’ temple. Aleister Crowley was allegedly the high priest of this sect which would then transfer new recruits to a secret chapel back in Dartington Hall to be further corrupted. The old rogue would probably have been delighted with the notoriety!

We end this odd little story with the latest incarnation of Wheatley’s book. In 2006 a film based on ‘The Haunting of Toby Jugg’ was produced by the BBC. ‘The Haunted Airman’ starred Robert Pattinson, who later became the vampire love interest in the Twilight series. The Stage described the film as a “very disturbing, beautifully made and satisfyingly chilling ghost story”. The script, however, simplified the plot of the book and doesn’t use the Satanist subtext. The supernatural manifestations are ambiguous and it isn’t clear whether they are just the product of Toby’s post traumatic stress.

A paddleboarder was rescued today, Friday, 15th October after getting into difficulty off Goodrington. RNLI Torbay, Torbay Coastguard and an ambulance attended the incident just before 1pm. The padd…

NHS Test and Trace (NHS TT) have suspended testing operations provided by Immensa Health Clinic Ltd at its laboratory in Wolverhampton, following an investigation into reports of people receiving nega…

People in Devon are reminded to get their COVID and flu vaccinations to give themselves the best possible protection against these deadly illnesses this winter. The COVID jab does not protect again…