A Newton Abbot woman who overcame paralysis from the neck down and lost loved ones to cancer is preparing with celebrity dancers for a Guinness World Record attempt at Wembley Stadium in aid of charities close to her heart.

Maxine Hobson used to be a professional dancer, working in places such as Japan and on cruise ships. She had danced since the age of three, but her career came to abrupt end in 1998 when she got a neurological illness called Guillain-Barre Syndrome, paralysing her from the neck down.

Plucky Maxine fought for 12 months to regain her mobility, making a 95 per cent recovery and going on to dance again professionally in 2003.

Maxine has been training with the likes of Strictly Come Dancing’s Oti Mabuse and Pussycat Doll Kimberly Wyatt, and will perform with them and others at Wembley.

It follows last year’s announcement of a five-year partnership between Tesco and the three charities – Little Helps for Healthier Living.

In addition to her battle with Guillain-Barre Syndrome, Maxine recently lost her aunt to cancer, as well as her mother-in-law, aged 57, to breast cancer.

Maxine said: “I was dancing on a cruise ship when I fell ill. It started with pins and needles in my toes, and within a week I was in intensive care, paralysed from the neck down. It was really frightening. But I had an amazing physiotherapist and occupational therapist, and a year later I had 95 per cent mobility.
“The physio and occupational therapist said some of my recovery was down to muscle memory. The years of dancing had helped me recover – so it shows that dancing is good for you. I’m so glad I can dance again, even if it’s just for fun nowadays.

“When I heard about the Tesco Dance Beats, I wanted to be part of it. It was great to train with Oti and Kimberly. They were a lot of fun and really encouraging.

“Dancing is a passion of mine and I wanted to do it in memory of my aunt. One in two people will be diagnosed with cancer in their lifetime. Every single £1 raised helps to fund research into finding a cure.” 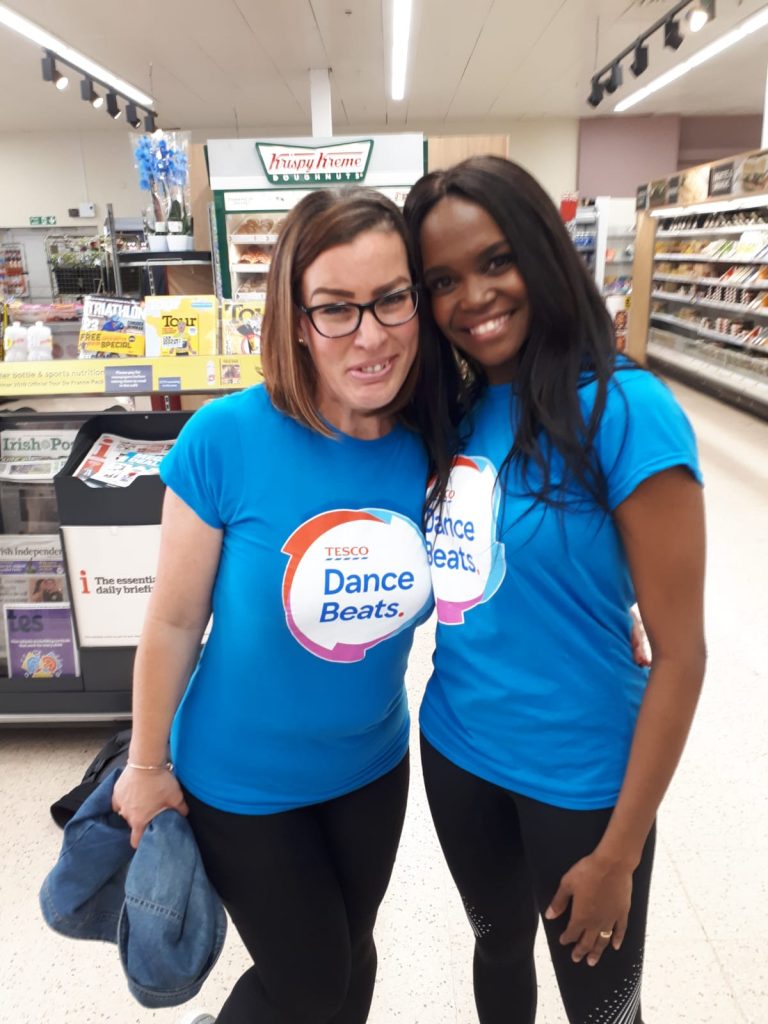 Dance Beats forms part of Tesco’s major new fundraiser, which Maxine will take part in, covering three days of dance marathon fundraisers in thousands of Tesco stores across the country on 18, 19 and 20 of July.
It will then conclude with an ambitious Guinness World Records attempt at Wembley Stadium on 19 and 20 of July, where thousands of Tesco colleagues and members of the public will come together to complete a 30-hour dance marathon relay.

Tesco and the UK’s three biggest health charities are calling on the public to get behind Dance Beats in one of four ways:
• SUPPORT YOUR LOCAL STORE: Head down to the Newton Abbot Tesco store to support Maxine’s Dance Beats event, as well as taking part in fundraising events on 18,19 and 20 July
• JOIN MAXINE AT WEMBLEY: Apply for tickets to participate in the Guinness World Records attempt at Wembley stadium on 19 and 20 July
• SHOW YOUR MOVES: Check out Tesco social channels from the end of June and have a go at performing one of the signature Dance Beats moves. For every dance move you upload, Tesco will donate £10 to the Dance Beats campaign up to a maximum of £100,000
• CREATE YOUR OWN EVENT: Download the Dance Beats fundraising guide and create your own community dance event

To find out more information, apply for tickets to the world record attempt and download the Dance Beats fundraising guide visit www.Tesco.com/DanceBeats

Dave Lewis, Tesco CEO, said: “Cancer, heart and circulatory diseases and diabetes touch almost every family in the UK, which is why in our centenary year we’re launching Dance Beats to support the important work of our three health charity partners. Our colleagues and customers continuously go to amazing lengths to raise millions for charity and we hope Dance Beats will be a great way to fundraise and have some fun through dancing.”

Oti Mabuse, star of Strictly Come Dancing and The Greatest Dancer, said: “Being part of the Dance Beats campaign gives me an opportunity to not only support three wonderful charities but also share my love for dance and the health benefits a good dance session can provide.”