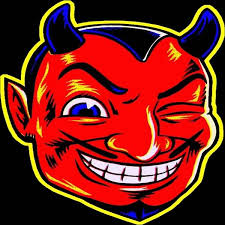 The visit came to people’s attention when, after a heavy snowfall, trails of hoof-like footprints were seen in the snow. It was the residents of Exmouth who first discovered, “strange cloven-hoofed footprints not from a four-legged farm animal. The creature that had made these tracks walked like a man, striding and upright”.

These indentations were then quickly given the name of the Devil’s Footprints as they were interpreted as having been made by a cloven hoof. They were alleged to cover a total distance of between 40 and 100 miles – the footprints, “measured around four inches long, three inches across, between eight and 16 inches apart and were mostly in a single file”’. 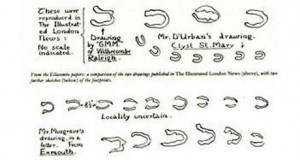 The newspapers quickly became interested and the Devil’s visit was reported in the national papers which published drawings of the ‘evidence’ (above). This  fed into the London narrative that Devonshire folk were superstitious bumpkins.

The footprints reportedly travelled over houses, rivers, haystacks and other obstacles. They were seen on the tops of roofs and walls, and were observed leading up to and leaving narrow drain pipes. From Exmouth they ran through open countryside to Topsham and then continued on the other side of the Exe, extending via Dawlish and Teignmouth and finally to Barton and Watcombe in Torquay. There they ended, giving rise to the notion that the Prince of Darkness is still hanging around in Torquay and possibly reading this… 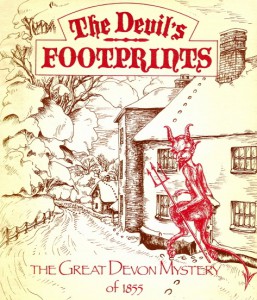 The rumours spread quickly and there were reports of sightings of a “devil-like figure” wandering the hills and woods. Local religious leaders advised their flocks that the Devil was walking the earth and they urged people to be vigilant – in response, people armed themselves and attempted to track down the culprit. Of course, the Fallen Angel wouldn’t have stood much of a chance against an angry Watcombe resident armed with a pitchfork and fuelled on cider, so the Evil One kept a low profile. 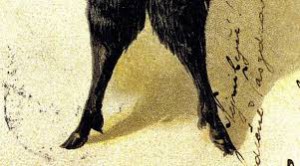 A number of explanations have been put forward for the footprints. And it’s worth noting that the reports stated that they ran for over a hundred miles. In the days before the internal combustion engine, no single person could have followed the entire route on the day they were discovered. Therefore, there must have been a variety of different eye-witnesses and so descriptions of the footprints varied widely. 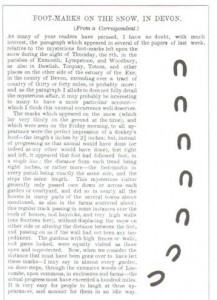 Consequently, we may be looking at a case of mass hysteria. A variety of animal tracks, possible hoaxes and various natural phenomena had been brought together and interpreted as having a single supernatural cause by a population raised on myth and superstition. It may also be relevant that reports of similar obstacle-climbing footprints are also to be found in Scotland and Poland.

However, there is an interesting theory that is reminiscent of the Roswell UFO myth. The author Geoffrey Household relayed a story he had heard that, “an experimental balloon” had been accidentally released from Devonport Dockyard. As the escaped balloon crossed Devon, it trailed two shackles on the end of its mooring ropes, leaving the tracks. The incident was then covered up as the shackles also damaged greenhouses and windows before the balloon finally landed in Honiton.

As a very loose link, here’s Mad Dog Mcrea’s version of ‘The Devil Went Down To Georgia’ performed in Torquay during Christmas 2011:

For more community news and info, join us on Facebook: We Are South Devon or Twitter: @wearesouthdevon
…