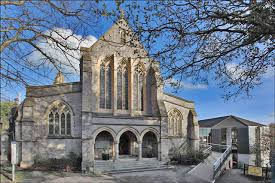 The Western Times of November 6, 1914, covered a story, ‘Col. Burn’s Late Son: Torquay’s Expression of Sincere Sympathy.’ It reported that a speaker at a memorial service for the fallen soldier held at St. Matthias’ Church in Ilsham (pictured above and below) had read from the letter of an unnamed chaplain serving at the Front which said.

“Tell the Territorials and soldiers at home that they must know God before they come to the front if they would face what lies before them. We have no atheists in the trenches. Men are not ashamed to say that, though they never prayed before, they pray now with all their hearts.” 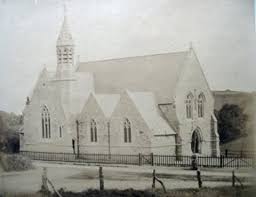 That appears to be the first use of the saying, “There are no atheists in the trenches” which is still being used today to vilify atheists. The phase seems to imply that non believers are hypocritical, and that an atheist under pressure will turn to god, and so will stop being an atheist. That saying first reported in Torquay was then used again and again during twentieth century conflicts.

Following that first instance, in June 1916 The Times printed a comment from a soldier as reported by the Lord Mayor of London: “I can tell you, Sir, there are no atheists in the trenches. There is something in the air which tells us, when most eager to fight for our country, that we must trust to a Higher Power”. 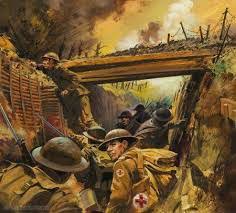 In February 1918 a religious periodical St. Andrew’s Cross enlarged the atheist-free area: “A young officer, just returned from the fighting front in Flanders, says, ‘There are no atheists within a half mile of the front trenches.’ Men may scoff and be indifferent when death appears to be a far-away thing reserved for some distant old age. But they become serious when it may descend suddenly from the clouds, or spring out of ‘no man’s land.’”

The saying then moved to the United States and was common during the Second World War, replacing ‘trenches’ with ‘foxholes’. US Military Chaplain William Thomas Cummings said it in a field sermon during the Battle of Bataan in 1942, and in May 1943 war correspondent Ernie Pyle reported, “There are no atheists in foxholes – nor in cockpits!” It was then quoted by President Eisenhower in remarks broadcast from the White House in 1954. 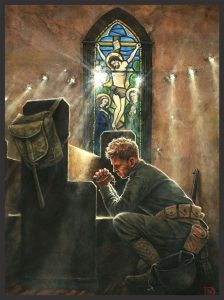 The roots of the phrase may be much deeper, however. Plato supposedly said, “That there are few Men so obstinate in their Atheism, that a pressing Danger will not reduce to an acknowledgment of the Divine Power”.

However, what the Torquay statement does suggest is that atheism wasn’t unknown either at the Front in Flanders or in Torquay itself. This challenges the impression we have of Victorian and Edwardian Torquay as a deeply religious society. Yet, church attendance had already begun to decline during the middle of the 19th century, while the decline in actual membership really began in the Edwardian period.

Recognising that Christian observance wasn’t what it used to be was the Vicar of Ellacombe, the Reverend CE Storrs, who in 1895 gave a sermon entitled “If Christ came to Ellacombe”. The Reverend believed that Jesus would be displeased at what he would find: “If Christ came to Ellacombe he would see indifference and unbelief more than ever he suffered on earth before. He would find the evil of intemperance rampant. He would meet it everywhere. He would see drunken crowds and sottish selfishness. If Christ came to Ellacombe and did a miracle, instead of turning water into wine, as he did in Galilee, He would be rather disposed to turn all strong drink into water. The people of Ellacombe had better renounce the name of religionists, and call themselves ‘alcoholists’.” 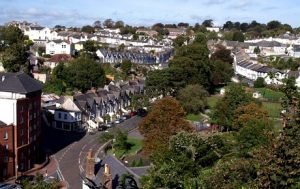 Responding to the falling away of faith the sermon was followed up by research amongst Torquay’s “working men as a class” to find out why they weren’t going to church. Women, it was decided, weren’t the problem and were retaining their church-going habits as, “it was more of change for women to go out on a Sunday, because they had been in all week, where the men had not”.

At a subsequent Torquay public meeting in 1895 the top ten reasons for not attending church given by locals were read out. Some of these included “the great need for fresh air” and that working men had unsuitable clothes for church. Others said that they did not care to attend a church that had one part for the rich – where seats could be bought – and another for the poor, or that men and women were divided up. Some claimed that the sermons were too long, too dull and too dry.

Above all, the researchers found that amongst Torquay men there was an “indifference to religion”. Perhaps surprisingly, the meeting reported that “some weren’t Christians” at all, and “a great reason in large centres of population for men not going to church was the spread of atheistic doctrines”.

This decline in church-going continued during the 20th and early 21st centuries and has accelerated since the 1960s. Now, for the first time, more than half the population say they have no religion, and the generation gap on religious affiliation is widening, according to a recent British Social Attitudes survey.

Today, only 3% of adults under 24 describe themselves as Anglican – fewer than the 5% who identify as Catholic. Almost three out of four 18- to 24-year-olds say they have no religion, a rise of nine percentage points since 2015. Among the next age group, 25-34, only 5% identify as Anglicans and 9% say they are Catholic. The presence of young European workers may be the reason for a relatively high proportion of young Catholics – applicable in Torquay where around 10% of the town centre’s population is from Eastern Europe.

This change is happening surprisingly quickly. Among all adults, only 15% consider themselves to be Anglican, compared with almost one in three at the turn of the century. Nine percent overall identify as Catholics, 17% as “other Christian” and 6% say they belong to non-Christian religions.Significantly, 53% of all adults describe themselves as having no religious affiliation, up from 48% in 2015.

So, that saying first used in a Torquay church seems to have recognised that there were atheists in Edwardian England and that they were a concern for the Church even then. Let’s close by giving the American author Kurt Vonnegut the last word, “People say there are no atheists in foxholes. A lot of people think this is a good argument against atheism. Personally, I think it’s a much better argument against foxholes.”