This is a vampire crab. With its purple body, orange pincers and piercing pale eyes, it’s a nightmarish vision. And a crab that’s also a vampire? Days out at the beach will never be the same…

You may not have heard of a vampire crab, though it’s a species popular with aquarists – in fact, illegal over-collection for the pet trade is a real threat to the species.

As alarming as it looks, this amazing photo, taken by Paignton Zoo photographer Eleanor Stobbart, betrays the true size of this tiny crab. It’s found in India, South East Asia and the islands of the Pacific. The spooky name was coined because of that startling appearance; the good news is, they don’t actually suck blood at midnight… 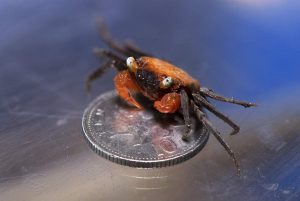 Paignton Zoo’s Lower Vertebrates & Invertebrates team has bred vampire crabs at the Devon zoo for the first time. Keeper Lauren Lane is a big fan: “They are totally amazing! They’re small, active, colourful crabs that live in freshwater in the forests of Java and Indonesia. They are threatened by over-collection for the pet trade. The species was only formally described in 2015.”

Paignton Zoo staff collected adults and juvenile crabs at the beginning of December from Chester Zoo. With the recent hatching of some 60 youngsters, there are now around 80 to look after. Lauren again: “The females carry the eggs and then they hatch as little ready-to-go crabs. We don’t really see the egg stage as the girls stay hidden. We hope that lots of the hatchlings will survive. We will split them into smaller groups to reduce the risk of them eating each other.”

The vampire crabs will be among the species guests will be able to see when the revamped Investigate bug house opens later in the year. Paignton Zoo Environmental Park is a registered charity. For more information go to www.paigntonzoo.org.uk or ring 01803 697500.