A hand-crafted chocolate ostrich egg is the prize on offer at Paignton Zoo this Easter.

Everyone who completes the Easter egg trail around the Zoo over the weekend of Good Friday 3rd April to Easter Monday 6th April will be entered into a draw to win a cuddly toy bunny and a chocolate egg the size of an ostrich egg!

The egg has been made by chocolatier Tony Fagan of the Cockington Chocolate Company. It is around 24 centimetres tall with a 49 centimetre circumference. Tony used over a kilo of top quality chocolate, layering white over milk to give the shell depth, with speckles for added effect. The giant egg nestles in a chocolate cup with smaller chocolate eggs scattered around. 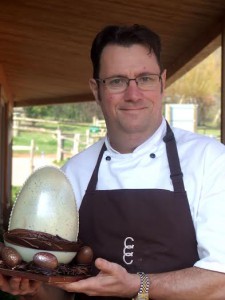 Tony Fagan with the egg

Tony, the man who covered a gorilla in chocolate during the Great Gorillas project of 2013, said: “The Cockington Chocolate Company is very happy to donate this egg to Paignton Zoo. We hope people have a lot of fun doing the trail – and we hope the lucky winner likes chocolate!”