A Rothschild’s giraffe has been born at Paignton Zoo. The calf was born to mother Sangha at about 2.30pm on Thursday 28th May, in the middle of a busy half term afternoon.

Senior Head Keeper of Mammals Matthew Webb: “We let her wander about and find her own place to give birth, rather than separate her off. She chose to give birth in the giraffe house, in front of visitors in the gallery and a crowd of excited keepers.”

Births often happen overnight, but this one came with hundreds of visitors looking on. 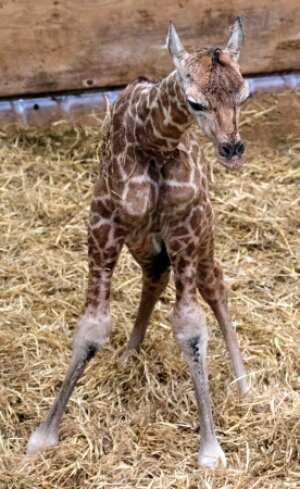 Zoo spokesperson Phil Knowling said: “Remote cameras showed the baby feeding from mother overnight. This morning keepers are hopeful that the baby is healthy and that Sangha will rear the calf, although it is very early days – we are still in the critical phase.”

The gestation period for a giraffe is between 400 and 460 days. The mother gives birth standing up – the fall breaks the umbilical cord. The calf is on its feet within a few hours and can be nearly six feet tall at birth.

Father Yoda came from Givskud Zoo, Denmark, in September 2006. Sangha came from Liberec Zoo, in the Czech Republic. The Zoo’s other adult female is Janica, who came to Paignton Zoo from Duvr Kralove Zoo in the Czech Republic. The her also includes youngsters Otilie, who was born in September 2012, Joanna, born in January 2014, both to mother Sangha, and Eliska, born to Janica in January this year.

They are all Rothschild’s (Baringo) giraffes. Rothschild’s giraffes are classified as Endangered – there is a European Endangered species Programme for the species. Paignton Zoo Environmental Park is a registered charity. For more information go to www.paigntonzoo.org.uk or ring 0844 474 2222.