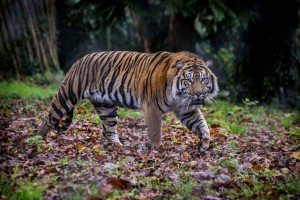 Fabi moved to Chester from Prague Zoo in 2009. He is a proven breeder, having fathered seven cubs with Chester’s resident female, Kirana – who was born at Paignton Zoo in 2006.

The move is part of a European breeding programme for Sumatran tigers which uses a system of studbooks to match animals. The studbook holder is responsible for pairing well-matched individuals to ensure a healthy and genetically-diverse population of animals in the breeding programme.

Sumatran tigers are Critically Endangered, with just 300 thought to remain in the wild. Their numbers continue to decline due to habitat loss, poaching and human-tiger conflict, meaning the insurance population to be found in zoos is vitally important to the future of the species.

Paignton Zoo’s previous male Sumatran tiger, Tenang, had to be put to sleep because of illness, but in his time he successfully sired 4 cubs, including Kirana, that have all gone on to breed at other zoos. Paignton Zoo Curator of Mammals Neil Bemment said: “We hope that Fabi and Shakira will get on well together. He is settling in very quickly to his new surroundings and early signs are good, with lots of encouraging vocalisations.”

Fabi travelled the 250 miles via the M6 and M5 in a purpose-built travel crate. The two animals are both important genetically, ranked in the top 15 Sumatran tigers in Europe.

Whitley Wildlife Conservation Trust Director of Living Collections Stewart Muir said: “We hope that Fabi and Shakira will breed successfully and help us to help the dwindling population of Sumatran tigers.” Paignton Zoo Environmental Park is a registered charity. For more information go to www.paigntonzoo.org.uk or ring 0844 474 2222.