This tiny new-born is a mandrill, an endangered primate from the rainforests of West Africa. Born at Paignton Zoo on 26th September to parents Marta and Jumanji, the youngster is another important contribution to the European Endangered species Programme, of which Paignton Zoo is a part. 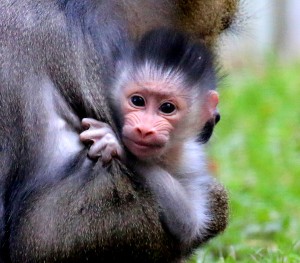 The Zoo’s troop includes male Jumanji and females Makemba, Mirjam and Marta, youngsters Jumba, Jabari and Jemima, plus an unnamed baby born in January. It’s though that this latest new-born is a female.

Despite their fearsome appearance, mandrills (Mandrillus sphinx) feed on fruit, fungi, insects, nuts, roots, seeds and small invertebrates. Their colouring is thought to help keep the group together whilst travelling in the rainforest. A single youngster is born after a gestation of 5 to 6 months.

Threats to the species include habitat destruction and hunting. There is a European Endangered species Programme (EEP) for the mandrill and it is listed as Vulnerable by the International Union for the Conservation of Nature (IUCN). Paignton Zoo Environmental Park is a registered charity. For more information go to www.paigntonzoo.org.uk or ring 0844 474 2222.