The parents of a Devon boy who died from flu in January this year say they are overwhelmed by massive public support for their vaccination campaign, and are urging people to keep spreading the message.

The #ThumbsUpForCoby flu vaccination message, named after nine-year-old Coby Simons, has reached approximately 200,000 people nationwide on social media since it was launched by his brave parents Louise Simons and Jamie Chrichard at the start of October.

The campaign has been also been reported widely by Devon’s print, digital and broadcast media to reach an estimated ¾million people. 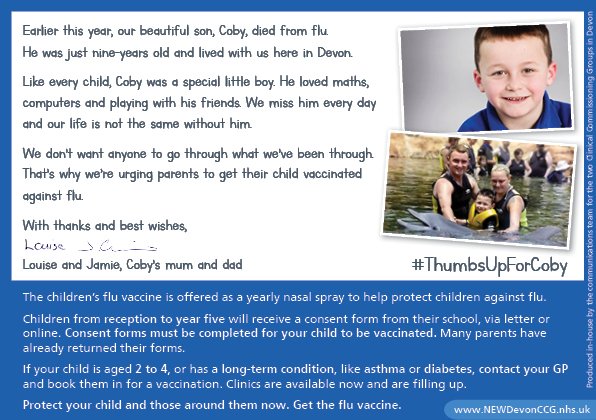 Louise and Jamie are urging parents to vaccinate their children this winter after Coby died of pneumonia on 24 January 2018, just days after coming down with flu.

Louise said: “We can’t believe how much support the campaign has had so far – and we want to keep it going strong so we’d love it if people kept sharing the message.

“We miss Coby every day and would never want anyone to go through what we’ve been through.”

Getting children vaccinated is the single best thing parents can do to protect against the virus.

To help promote the campaign, thousands of ‘postcards’, featuring photos of a smiling Coby with his thumbs up and a message from Louise and Jamie have been distributed to children’s centres, GP practices, schools, leisure centres and libraries across Devon.

Organisations supporting the campaign include Devon home delivery firm Veg in a Box, which is adding the postcard to each of its deliveries across the county, as well as promoting the message on social media.

On Twitter and Facebook the campaign has been shared and viewed thousands of times across the country, with support as far afield as Lincolnshire, Portsmouth and Lancashire.

Jamie added: “Thank you to everyone in the community, the media and on social media who has helped spread the message so far – the response has been overwhelming.

“Whether it’s a chat with other parents in the playground or on Twitter and Facebook, please keep sharing the #ThumbsUpForCoby message – and please get your children vaccinated against flu.”

The free vaccination programme has been extended this year meaning the nasal spray vaccine is offered to primary school children from reception through to and including year 5. Pre-schoolers aged 2-4 are also eligible for a free vaccine.

The #ThumbsUpForCoby campaign is being run in partnership with Devon’s NHS and public health organisations who say getting the vaccination is simple.

• Parents of children from reception class to school year five must give their consent for their child to have the vaccination at school and this year most schools in Devon are asking parents to use a simple online consent form – so make sure you check your inbox for the email or your child could miss out.
• If your child is aged 2-4 (but is not in school) or has a long term condition like asthma or diabetes, contract your GP and book them in for a free vaccination. Clinics are available now and are filling up so get in touch now to protect your child.

Children tend to be ‘super spreaders’ of flu, so protecting them is crucial for protecting the rest of the population, particularly those who have long-term conditions, elderly relatives or those with vulnerable immune systems.

Flu vaccines cannot give you flu. The injected flu vaccine given to adults contains inactivated flu viruses, so it can’t give you flu. Your arm may feel a bit sore where you were injected, and some people get a slight temperature and aching muscles for a couple of days afterwards. Other reactions are very rare.

The children’s nasal spray flu vaccine contains live but weakened flu viruses that will not give your child flu.

You can also find more information at www.newdevonccg.nhs.uk/stay-well-this-winter/flu-vaccination-101708