Police are appealing for witnesses after a collision in Kingskerswell yesterday (Wednesday 25 March) afternoon which left a motorcyclist with serious injuries.

Ambulance and police attended the collision, involving a white Ford Transit van and a silver Yamaha YZF motorcycle, which happened shortly before 1.20pm on  on Newton Road, outside the Texaco garage. 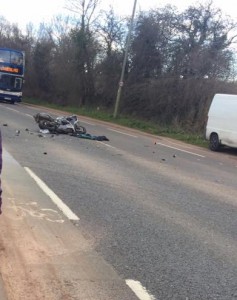 The scene of the accident

The 51-year-old male rider of the motorcycle, from Newton Abbot, was taken by ambulance to Torbay Hospital with potentially life changing injuries.

As a result of the collision the road was closed from the Kerswell Gardens roundabout, with tailbacks to the Penn Inn roundabout. 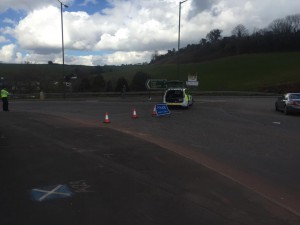 Newton Road was closed by Police

The road was re-opened at around 3.50pm.

Anyone who witnessed the collision is asked to contact the Exeter serious collisions investigation unit by emailing 101@devonandcornwall.pnn.police.uk
or by calling 101, quoting reference 342 of 25 March.