Emergency services were called to the area with a report that a car, blue BMW X5 had driven through a barrier and then went over the cliff.

The sole occupant of the vehicle, a 41 year old male, was pronounced deceased at the scene.

The car was recovered later that evening. 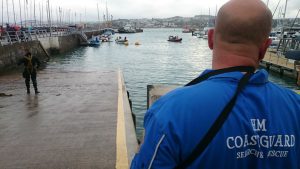 Floatation devices were used to recover the vehicle

A witness to the incident left the scene without leaving his details and police are appealing for him, and any other witnesses to the incident, to come forward to assist the enquiry.