Police in Plymouth are seeking the public’s help in identifying and locating two male victims of a serious assault.

The men (pictured) are believed to have been assaulted at The Blockhouse Inn, Devonport Road, Stoke on Friday 15 May at around 10.35pm. They left the scene before officers arrived. 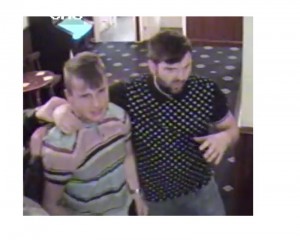 Do you recognise these men?

Three other men from Plymouth were assaulted by a man during the incident.

A 53-year-old man was punched in the face and he fell to the floor as a result. He did not suffer any injuries.

A 40-year-old man suffered a glass injury to his hand. He was taken to Derriford Hospital where he underwent surgery.

A 41-year-old man suffered a glass injury to his head and was also taken to Derriford Hospital for treatment.

Officers have arrested a 23-year-old man, from Torquay, on suspicion of assault. He has been released on police bail until 15 July pending further enquiries.

Detective Constable Glenn Harrop, based in Devonport, said: “We are urging these two men to come forward and talk to us. Similarly if anyone recognises them please get in touch.”

Anyone who recognises the male victims pictured is asked to contact DC Harrop by emailing 101@devonandcornwall.pnn.police.uk, calling 101 or Crimestoppers, anonymously, on 0800 555 111, quoting reference CR/033495/15.