The incident happened at around 5.45pm on Victoria Road. It is alleged that the victim was threatened by three men, one of which was carrying a pistol. Money was handed over by the victim who was left shaken but unharmed

Three men, aged 23, 24 and 52 have been arrested on suspicion of burglary and are currently in police custody. 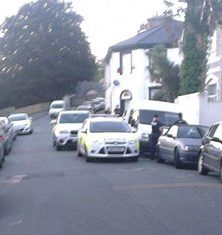 If anyone witnessed anything suspicious, or has information about this incident, please call 101 or email 101@dc.police.uk and quote crime number CR/60860/16.