Police investigating arson attacks in Exeter have released footage of man they wish to identify.

There have been a number of deliberate fires which police believe are linked.

Police are investigating 14 incidents that have taken place. The incidents have involved hedges, trees and vehicles in and around the Exeter area over the past few months.

Sector Inspector Simon Arliss, said: “We are investigating a number of offences which all appear to be linked, and we are asking for the public to help us identify the individual responsible.

“It is only by pure chance that no-one has yet been injured by this person’s reckless actions, and we are asking for local residents to be vigilant and for any CCTV footage that can help us with our investigation, to be share with us.”

Many of the linked incidents have involved hedges and foliage which are adjoining properties, where fires have been started by the suspect dousing the area in petrol before setting it alight. These have all taken place in neighbourhoods in the early hours of the morning.

The first fire reported to police was on Collins Road in the Stoke Hill area of Exeter in the early hours of August 9th. Since then we have had reports of fires or attempts to start fires near Stoke Hill Primary School; King Arthurs Road; Mayflower Avenue; Summerway; Whipton Lane; Pinhoe Road; Sylvan Road; Clevedon Close; Headland Crescent; and Brookway, Whipton.

“Some of our victims were elderly and unable to use their stairs – these fires could easily result in loss of life.

“We have released footage related to the incident on Mayflower Avenue from around 1.50am on Tuesday 15 August. It appears to show a lone man wearing a distinctive top, which has a large dark strip across the front, setting fire to a hedge adjoining a property before leaving the area.

“As the images show, it only takes a few minutes before this is a serious fire that could be a risk to life, and is tackled by the fire service.” 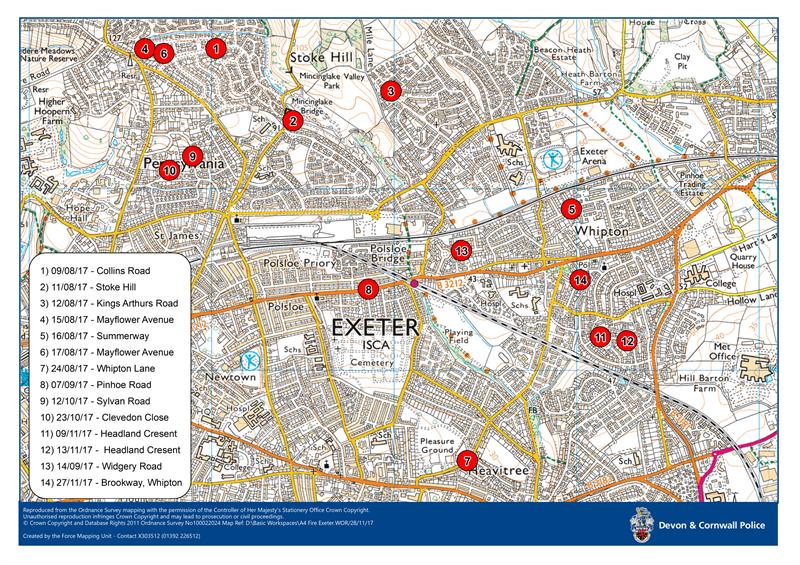 Nigel Deasy Exeter Fire Station Manager, said: “The impact that these deliberate fires are having on our community cannot be underestimated, Fire crews and Police are continuing their proactive campaign to reassure the public in the areas affected and Fire crews from Danes Castle & Middlemoor Fire Stations alongside our Police colleagues, have increased our presence in the areas of interest.

“We are appealing to the public to contact crime stoppers if they have any information on the recent spate of deliberate fires in these areas, by calling 0800 555 111.

“We urge the public to call 999 if they believe that a deliberate fire has been set, our fire crews will attend immediately to investigate, an early call will prevent these fires escalating and allow our Fire Investigation teams to gather evidence.”

Anyone with any information that can help police with this investigation is asked to contact 101@dc.police.uk quoting crime reference CR/068634/17. Information can also be passed on anonymously via CrimeStoppers on 0800 555 111.