The suspect packages that closed off parts of Exeter yesterday, were suitcases filled with electrical parts and wires police have said today. 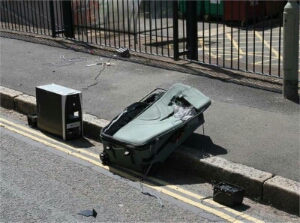 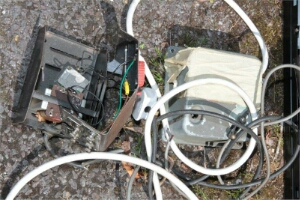 Wires were seen coming from the package

Superintendent Keith Perkin said: “We have released these images of the suitcases following the work undertaken by the bomb disposal experts to show to the public the type of incident we were dealing with, and why all involved in yesterday’s incident felt it appropriate to evacuate the area.

“This is never a decision taken lightly and we are aware of the disruption this causes to both residents and businesses affected, however, i hope these images of the cases will offer some understanding to the public on why we adopted a safety first approach yesterday.

“We have spoken to two people in connection with yesterday’s event. It appears that one person had filled the cases with old computer materials and electrical wiring and placed these in a nearby skip. Later, another person took these cases from the skip but abandoned them on York Road and King William Street. There was no malicious intent in relation to the placing of the cases and this individual has been given words of advice in relation to this matter.

“We are aware of how an incident such as this can affect the people of Exeter, especially with social media which now enables the public to offer up a whole host of speculation. Therefore we will have an increased number of visible patrols in and around the area and we will be visiting local businesses and residents to offer reassurance.

“I would like to personally offer my thanks to all of our communities and partner agencies for their role in what was a professional response yesterday, and to reassure you all that Exeter very much remains a safe place to live and visit.”