“Mordred”; a powerful Arthurian drama, all created by local people.

“I am what you made me become!” is the tagline of the film, spoken by Mordred.

This production aims to not only showcase very heavily researched Dark Ages (6th century) history of Devon and Cornwall, linked to some of the very earliest and less known Arthurian legends, but also equally to showcase the amazing skills by local actors, filmmakers, and other production creatives. Since there are very few opportunities, we decided to make our own and claw our own way up.

As production commences, we are still crowdfunding for the full costs of completing the two months of filming, and would be very grateful for any publicity or contributions to our crowdfund on Indiegogo at https://igg.me/at/mordred2016/x

On May 7th, 2016, principal filming begins, for this ambitious local production. It has been a long run of rehearsals, fund-raising, publicising and making costumes & props.

The cast, consisting of actors from across Devon and Cornwall have worked incredibly hard since being cast in this production at the end of February 2016. Travelling from all over the Southwest for rehearsals twice a week, the cast have not only needed to learn a challenging, emotional, action-packed script, but also many skills of the historical period; for example how to fight with a round shield, spear and shortsword, as instructed by Chris Barnicoat, Kev Start and Dave Trowt, who are Dark Ages combat specialists, based in North Cornwall.

Filming will run through May and June, around Devon and Cornwall, at a wide variety of locations, including a castle, and a reconstructed Iron Age site.

Contrary to the usual glamourous medieval settings for many Arthurian adaptations, with knights in gleaming plate armour, and ladies in stunning court dresses; this is a very different production. Set in the early 6thCentury, this drama is set within a very different landscape. 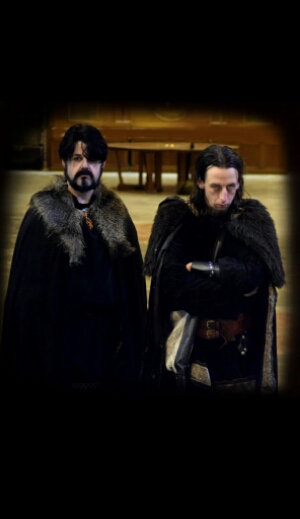 Following the departure of the Romans from Britain, the Southwest again became the Celtic kingdom of Dumnonia. At this point in history, the Saxons were raiding along the coast, much as the Vikings did, centuries later. Set against this backdrop, Arthur and his warriors, fight to defend Dumnonia, against invasion.

The timeline for this film came originally from the entry for the year 537AD in the Annales Cambriae;

537 The battle of Camlann, in which Arthur and Medraut fell: and there was plague in Britain and Ireland. “Medraut” was the name that in later legend, became Mordred. We went with the later name “Mordred” simply so that it would be more recognisable to modern audiences.

The Southwest is linked to a wide number of legends connected with King Arthur, and as we researched, we found yet more old stories, both of Mordred, and and of other, Mordred-like characters who almost never appear in modern adaptations of the legend. Piecing these together, against this dramatic, ever-changing landscape of the Dark Ages, and using peripheral history of the times – for example; as the Saxons began to expand their kingdom of Wessex, Cynric, who was the first king of Wessex, is also an important character in our drama – we created our own version of the legend, with a lot of the backdrop which would have existed in the time it is set.

After months of research, rehearsing and training, the cast are really excited to begin filming at last!

The group running it, The South Devon Players Theatre & Film Company, from Brixham in South Devon, also founded by Laura Jay, has a proven track record over 10 years of producing historical theatre and film, working from the early days of raising £80 from a carboot sale and using the backroom of a pub for rehearsals.

The large cast ranges from Julie Tetley playing Gitta; Morgan le Fay’s maid and co-conspirator, and thirteen year old newcomer Reece Whitehouse playing King Arthur’s “legitimate” son, Duran, in their first ever major acting roles (in fact the first ever role for Reece), through our more experienced actors Rich Sandford who stars as Mordred, and Guillaume Rivaud, who plays King Arthur, right over to “Iron” Mike Mitchell, who, after holding 5 “Mr World” and 2 “Mr Universe” titles with the World Fitness Federation, went on to the world of acting and has appeared in films such as Gladiator, Braveheart, Skyfall, Apocalypse Z – and the TV soap Emmerdale.

The South Devon Players have an unusual raison d’etre; exemplified, in this project. The group, which started out as an amateur dramatics theatre group, specialising in historical and mythological drama, are a group of local career-orientated actors and creatives, who are unable, for various life reasons, or lack of resources, to move away to large entertainment hubs such as London, to make careers there.

It was considered very important to make sure that we were not making “just another King Arthur film”, and to find a unique adaptation. While novels have been written from Mordred’s point of view, to our knowledge, this has never been transferred to film. That, coupled with spanning Devon and Cornwall, and delving into earlier and less known legends, has created an all new version of the legend.

Not that creating a production of this scale is easy. While grants are being applied for, and

traditional crowdfunding sources are being applied to, you cannot put all your eggs in one basket. Cast and crew members are involved in a wide range of fundraising activities, ranging from small amounts from tombolas and face painting at fetes, and selling on ebay, through to a film/ scifi/ fantasy convention, grant applications, cabaret shows, ebook publications and more.

For costumes and props, It is also a case of keeping one eye on the history book and the other on what reclaimed fabrics and items can be remade, and adapted. We have to thank so many people who keep an eye out for second hand things that we can do this with.

This is an ambitious project, taking not just every ounce of creativity on screen, but also in the planning and logistics behind-the-scenes.