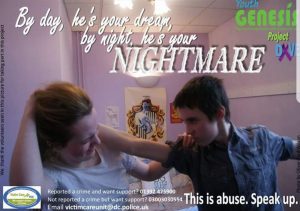 Project DAVE (Domestic Abuse Victim Equality) was created by a talented team of young people from local charity Youth Genesis Trust. The team are committed to ending domestic abuse in the Bay.

The project is a response to government posters tackling domestic abuse, which painted men as the sole perpetrators, and which limited the victim outreach to heterosexual females. Project DAVE’s response involves 7 new posters, created independently, that shows the other side of the story – that men and members of the LGBT community also suffer from domestic abuse in all its different forms. Three of those posters are shown here and will be distributed to youth and community groups across Torbay to stimulate debate over this serious issue. 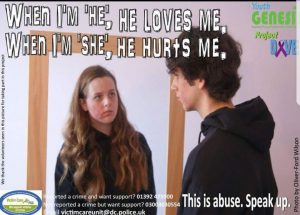 The team hopes that the issues raised in some of the images will encourage people to recognise abusive behaviour and encourage conversations about healthy relationships. 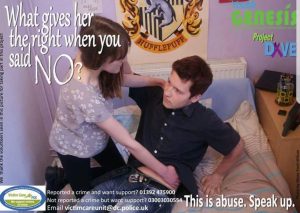 The project started in Brixham, and has gone on to gain recognition from the Home Office, from national high profile charities and even internationally – gaining interest from a charity based in Perth, Australia.

To find out more, visit: http://www.youthgenesis.org.uk/project-dave