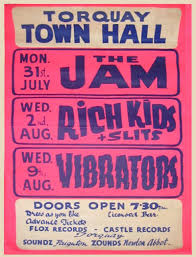 Dark haired dangerous school kids
Vicious, suspicious sixteen
Jet-black blazers at the bus stop
Sullen, unhealthy and mean
Teenage guerrillas on the tarmac
Fighting in the middle of the road
Supercharged FS1Es on the asphalt
The kids are coming in from the cold.

In the mid 1970s Punk came to Torquay. Influenced by shock tabloid coverage on this new kind of music, politics and fashion, a few local young people reacted against the excesses of Prog Rock and twenty-minute guitar solos.

But this wasn’t the punk of expensive bondage trousers and Vivienne Westwood designer T shirts. This was anti-fashion, appealing to outsiders. It was about taking a felt tip to an old school shirt and buying army surplus trousers. In Audley Park, Westlands, the Grammar Schools and South Devon College a handful of teenagers swapped their long hair, flared trousers and wide lapels for straight leg jeans, Doc Martens and ripped T shirts. 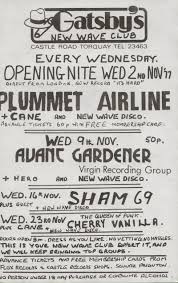 Torquay’s first punk venue was the short-lived Gatsby’s New Wave Club in 1977 (now the EF Centre on Castle Road). Local punks could see bands such as Plummet Airline, Avent Gardener, Cherry Vanilla and, on November 16 1977, Sham 69 and Torquay’s Cane – originally The Kayo Punks. Ian Dury was booked though, I believe, the club folded before he had the chance to appear.

Promotional materials are still around for Gatsby’s New Wave Club, and other venues such as Chelsea & The Cortinas’ gig at Torquay Town Hall on July 27, 1977, and The Kayo Punks at the 400 Ballroom on September 28, 1976 (50p admission). 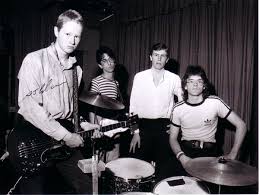 Torquay had a small punk scene that included bands such as Critical Press, Systum, and Glass Points. Notably, there was Das Schnitz, which was formed by agroup of friends from Torquay Boys Grammar School (pictured above). In 1979 they issued a 7 inch called 4AM. The band recalls: “It was recorded at the only studio in Torquay at the time, Swan Street Studios on an eight-track machine. Rates were £8 per hour, but we only had £12 so we were in and out within one and a half hours!” To save printing costs and in true punk spirit, the records all had sleeves converted from other bands’ releases on which the band wrote their name and titles.

Adrenalin were formed in Torquay in 1975 and became a punk band in 1977. Vocalist Ian Roberts later joined ex-Damned member Rat Scabies in the White Cats and then in an early incarnation of Culture Club. Later he was a member of the blues band The Nightporters. 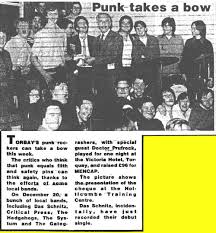 Other bands had their roots in Torquay. The Adverts‘ TV Smith and Gaye Advert were from Bideford, and they attended South Devon College, then still at Torre. This is The Adverts with Gary Gilmore’s Eyes on Top of the Pops, August 1977:

Another A4 gig flyer for the 1976 Tuesday night 400 Club gigs records:

Casino had just brought out an LP.   The 60p tickets could be obtained from Torquay’s Flox Records & Castle Records or Soundz in Paignton .

The October 5 Sex Pistols appearance advertised in the flyer was cancelled. There have been rumours ever since, however, that the Pistols did play in Torquay under an alias. Unless anyone knows better, the Pistols never played in The Bay. The source of the story is probably that one of their founders members did. This was the Rich Kids who appeared on August 2, 1978 at Torquay Town Hall.   The Rich Kids were founded in 1977 by Glen Matlock – after he quit The Sex Pistols. Matlock was credited with much of the music for the Pistol’s songs – while Johnny Rotten came up with the lyrics – and is recognised as co-author of 10 of the 12 songs on Never Mind the Bollocks. On leaving the Pistols, Matlock was replaced by Sid Vicious. The Rich Kids included future Ultravox member, Midge Ure, who had been in teeny bop band Slik. Also involved was Rusty Egan, who later went on to found Visage. After one album, Ghosts of Princes in Towers, and three singles, the Rich Kids disbanded in 1979. Here’s Ghosts of Princes in Towers introduced by Torquay’s-own Peter Cook on Revolver in 1978.

For many, punk wasn’t just about the music. It was a political movement. It was anti-racist and feminist with women forming their own bands and identities. Local punks were also often anti establishment, rebelling against what they saw as an old-fashioned town with repressive attitudes. It’s worth noting that earlier youth subcultures such as the beatniks and the hippies also complained of being harassed by the Council and Police. Also, bear in mind that this was still a very patriarchal Torbay where the Council allied with the Church to ban Monty Python’s Life of Brian in 1979. Specifically, local punks saw the threat posed by the rise of the far right in the form of the fascist National Front – in 1978 a coach load from Torbay journeyed to the East End of London to join 80,000 others at the Rock Against Racism Festival, headlined by The Clash:

There were occasional conflicts with other sub cultures such as local Teddy Boys. This probably wasn’t helped when some Torquay punks celebrated the death of Elvis Presley in 1977. In their defence teenage punks didn’t know the early rebellious Elvis, only the overweight Las Vegas caricature.  Indeed, it’s worth remembering how much Punk caused consternation across the country. This is from the Herald’s front page of June 1977:

A top rock group has been banned from Torquay Town Hall – and the man who was to promote the concert said that the decision by the council was due to “apathy and bloody-mindedness”. The Stranglers were due to appear on June 9 as part of a national tour. Mr Greg Van Dyke, the Plymouth promoter, said “I was told that the council were not willing to take the risk. But I was not told what the risk was… The council did not even do me the courtesy of ringing me. They clearly don’t know a thing about the band.” No one at the Town Hall was available for comment this morning.

Apparently, the problem was largely to do with the ‘risk’ that young people would hear the Stranglers swearing. Music fans were understandably angered: “For goodness sake, what are the council trying to do, bore us to death… Let us decide what’s best for us… Plenty for OAPs and visitors… nothing for the youth of Torbay… Head in sand council…” 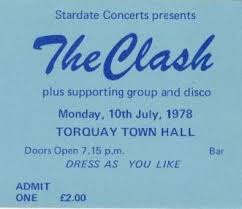 Regardless of official disapproval, the local punk scene survived. The Cravats are a punk band originally from Redditch, founded in 1977. On 31 July 1979 they recorded their first session for the John Peel Show on Radio 1. Three further Peel Sessions followed between 1980 and 1982. The local link comes in 1980 when the band relocated to Torquay and recorded their first album on an 8-track in a hotel basement. This was The Cravats in Toytown which took a whole week to record and which made it into the Top 20 in the independent charts. Here’s All Around The Corner from The Cravats in Toytown, recorded in that Torquay hotel basement in 1980:

But that was thirty five years ago. Some of the notable punks reinvented themselves, such as Sting and Paul Weller. We lost others along the way. In 1979 Sid Vicious died in his sleep in New York a few weeks after the violent death of his girlfriend, having overdosed on the heroin his mother had procured. Joe Strummer died suddenly in 2002, the victim of an undiagnosed congenital heart defect. John Lydon, better known as Johnny Rotten, went on to market butter. 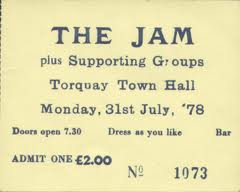 Punk never did die. The old Torquay punks are still out there and, occasionally, late at night someone still plays an old punk classic on a juke box in a town centre pub…  Let’s end where we started with the troubadour of punk, Tom Robinson: