Police have renewed an appeal for witnesses after an incident in Torquay on 22nd November.

A mother and child were seriously injured following a collision near the junction of Torbay Road and Sea Way Lane just before 1.20pm

The woman suffered serious head and leg injuries, and is being treated at Derriford Hospital, Plymouth. Her injuries are described as life-changing.

The six-year-old girl suffered serious leg injuries and was taken to Torbay Hospital before being discharged.

The driver the Daihatsu, a 53-year-old man from Brixham, was taken to Torbay Hospital with minor injuries.

The road was closed for seven and a half hours while a specialist forensic investigation of the scene took place. 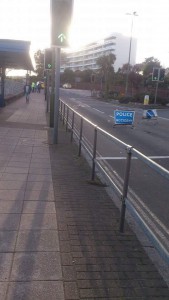 Enquiries are ongoing with the investigation into the cause of the collision.

Officers from the Serious Collisions Investigation Unit are appealing for witnesses to this incident to contact them.

Any witnesses who have not yet come forward to police are asked to call 101 and ask for PC Tim Walsh, quoting reference 400 of 22 November.