Update (6/2/15):
An 82 year old man remains in Torbay Hospital with serious injuries following the accident, he is reported to have suffered a heart attack at the wheel.

Update – The police have now closed the Road between Esplanade Road and Queen’s Road.

RTC UPDATE: We expect the road to be closed for a number of hours. Please avoid the area. #Paignton Seafront Thank U. pic.twitter.com/phhLo97VbD

“Two adults were treated by Ambulance personnel and were conveyed to hospital. Crews made the vehicle safe using small tools,”

Esplanade Road in Paignton is partially blocked due to an overturned vehicle.

Emergency services are currently on scene. 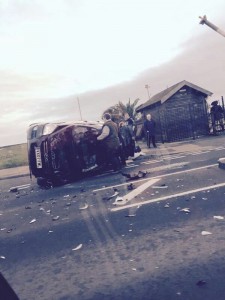 Newton Road in Kingskerswell is also currently closed due to a serious accident; https://wearesouthdevon.com/a380-newton-road-closed-due-serious-accident/

A380 Newton Road closed due to serious accident

A380 Newton Road closed due to serious accident