Update: The roads have now been opened in the area. The man got down safely via the fire services aerial platform after around 4 hours on the roof.

Roads have been closed and traffic diverted in Torquay near the Police station due to a man threatening to jump from a roof.

Emergency services are at the scene in South Street.

Witnesses state that the man seemed distressed, shouting and threatening to jump. 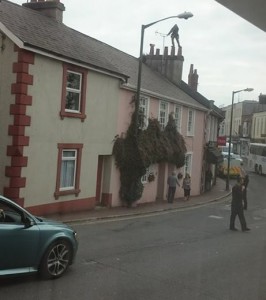 Emergency services are at the scene

Roads around the area have been closed.

Please avoid the South Street area of #Torquay for the time being. Roads are closed to allow officers to deal with a man on a roof.