A funding shortfall is forcing local hospice Rowcroft to scale back its services in order to protect its long term future.

The hospice has identified it needs to make over £1 million in savings over the next four months.

A decline in the hospice’s legacy income, increase in demand for services and the financial pressures on the NHS have led to the current funding position.

Acting Chief Executive, Jon Hill, explained: “We have experienced a significant reduction in our legacy income and have been unsuccessful in negotiating an increase in the recurring funding we receive from the NHS. This coupled with an increase in competition within the charity sector and a growing demand for the hospice’s services has led to our current situation. Unfortunately, we are not alone, hospices across the country have been reporting funding shortfalls and risks to services.”

Every year, it costs the hospice well in excess of £8m to provide its services and of this almost three-quarters is funded through donations and legacies. The NHS provides funding for the remaining 27% of the costs incurred by the hospice. 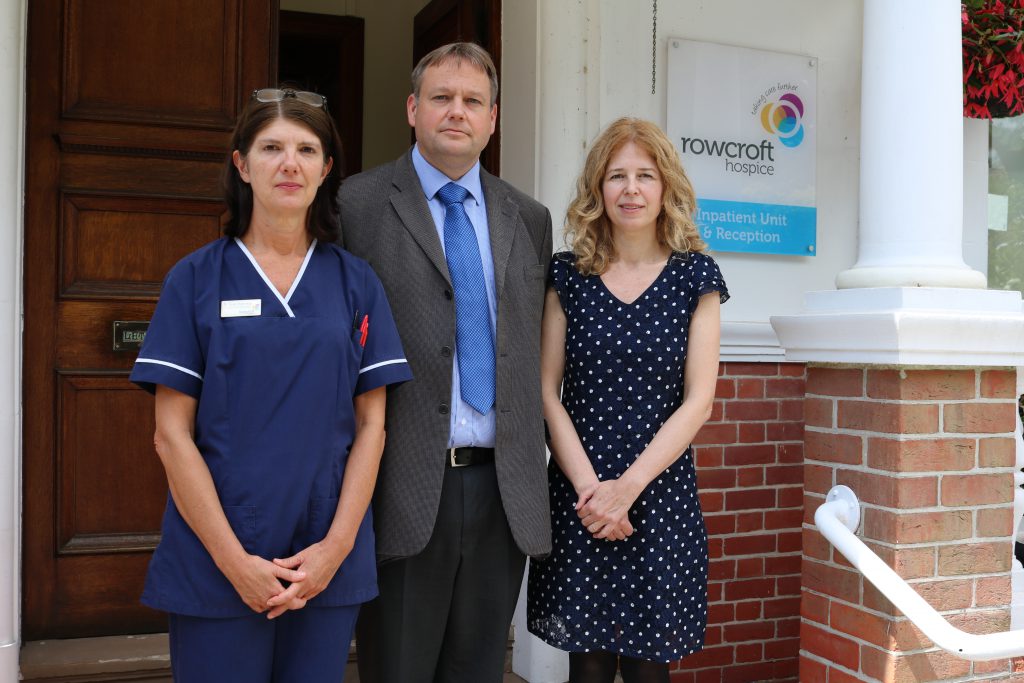 Rowcroft has significantly increased the number of patients and families it cares for in recent years; to more than 2,200 in 2015 and services such as Hospice at Home have expanded to provide 24/7 care to patients in their own homes.

Dr George Walker, Clinical Director added: “Over the last few years we’ve had to make significant investment in our services in order to meet the needs and growing demand of our local community. The number of patients and families we care for has more than doubled in the last ten years. The cases we see are increasingly complex, leading to the necessity for increased staffing levels, thereby incurring higher costs.”

Jon Hill continued: “Unfortunately, despite our best efforts and a 13% growth in fundraising income, our income has not grown quickly enough to enable us to sustain all of our services. This coupled with an unexpected downturn in legacy income has meant the hospice has to make substantial cuts in order to secure its long term future.”

The cost reduction is planned with the objective of minimising the impact on patients, as far as is possible.  It will be achieved through service redesign, retaining the ongoing objective of providing more services in patient’s homes, balanced with the ability to provide a complex care in-patient facility on the main hospice site, albeit with likely reduced bed numbers.

Some of the hospice’s services will have to be scaled back and there is a proposal for the chronic oedema clinic, which supports patients with lymphoedema, to no longer be provided through the hospice. The hospice is currently in detailed discussions with the local NHS to find an alternative solution for patients currently attending this clinic.

Dr George Walker said: “Our first priority is to our patients and we are doing everything we can to protect the future of the hospice which has touched the lives of thousands of people since it was established in 1982. Making cuts to our services has always been the absolute last resort but we now know we have no other option.”

Since 1982 Rowcroft has provided free of charge care to patients, their families and carers wherever support is required; within its Inpatient Unit, Outpatient Centre or in the wider community. Its care provision was recently rated Outstanding by a CQC inspection.

Jon Hill concluded: “We are fully committed to the provision of excellent end of life care in South Devon and this will not change. Our vision for the next three years is to return the hospice to financial stability. Once stability has been achieved we plan to start rebuilding services with revised funding models in place that enable us to be less dependent on legacy income and on the contribution we receive from the NHS.”

Rowcroft has been active in arguing for greater government financial support for hospices. Totnes MP Dr Sarah Wollaston is a long-term supporter of the hospice and has already raised the issue of hospice underfunding in the House of Commons. Rowcroft Hospice was called to give verbal evidence to the Commons Health Select Committee last year, at which representatives from Rowcroft argued that hospice services were vulnerable through being majority funded from charitable giving. In a bid to get additional funding for hospices from the government, Rowcroft’s efforts were followed up by a discussion between the hospice and the Secretary of State for Health during the 2015 election, and within a recent formal meeting with the Minister for Health.

Rowcroft is urging supporters to support the hospice in whatever way they can; from making a regular or one-off donation, to playing the hospice’s lottery or donating to Rowcroft’s shops.

Rachael Bryett, Head of Fundraising at Rowcroft, explained: “Our local community’s support has never been more vital. Just £5 a month will help to safeguard Rowcroft’s future; the best way to do this is by making a regular, monthly donation, as this is a sustainable, predictable and reliable source of income for us. However, anything you might be able to offer no matter how big or small would be hugely valuable and will help us to continue to provide our essential care to our patients and their families right now.”

Nine local personalities stepped up, stepped out and turned up the heat at the Riviera International Centre, Torquay, last Friday, with a Strictly-inspired ballroom event to raise funds for South Devo…

By 2035 the UK population is forecast to grow to 72 million, with twice as many people aged 85 and over. This will bring additional demand for quality end-of-life care, which hospices and healthcare s…