Torbay Hospital’s Special Care Baby Unit (SCBU) has just been given a £15K boost thanks to being named as Sainsbury’s local Charity of the year for 2015/16.

A total sum of £14,822.44 was raised through various events held at Sainsbury’s branches at The Willows and St Marychurch, Torquay. 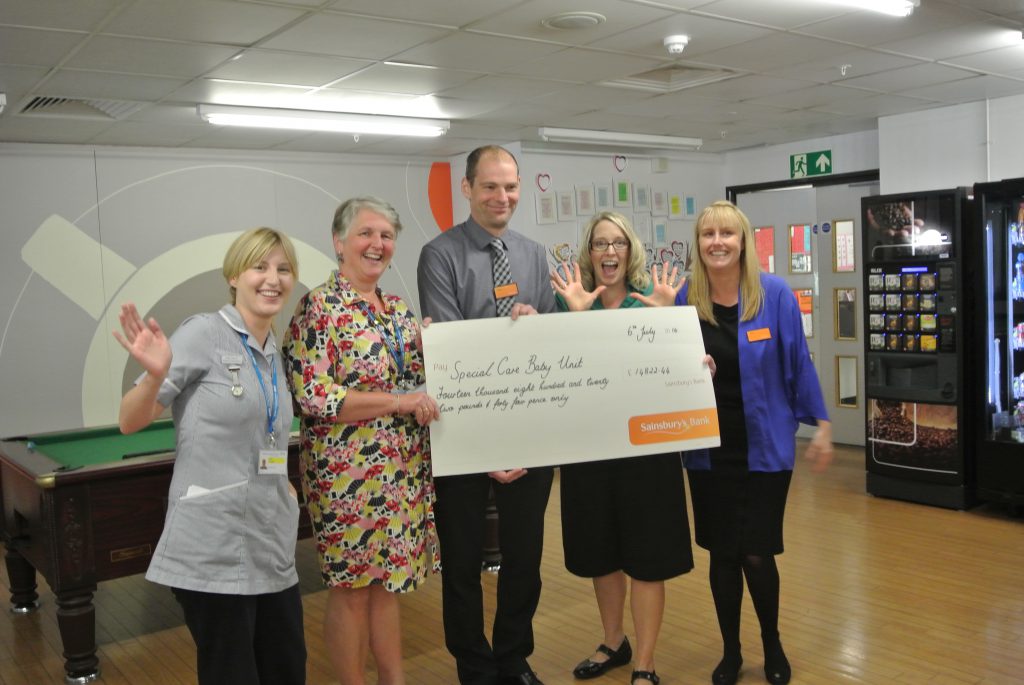 Karen Green, Child Health Practice Manager for Torbay and South Devon NHS Foundation Trust, said:  “Some of the money raised will be used to update the family room and improve facilities for parents. This will hopefully include moving it from its current internal location to a bigger brighter room with windows, creating a more comfortable and relaxing environment. We also wish to use some money to create a ‘Pad for Dads’ as we currently have no provision for dads to be able to stay on SCBU with their babies.

“On behalf of our babies’ parents and carers, I would like to say a huge thank you to the public, firstly for voting for us and secondly for their extremely generous donations throughout the year. My thanks also to all the staff in the various Sainsbury’s branches, and in particular to Sarah Spurling from the Willows branch for her ongoing help all year.”

Mark Prout, Store Manager at Sainsbury’s The Willows, added: “Our aim at the start of the year was to match the amount raised by the previous year’s charity, ie £10,000, so we were absolutely delighted to smash that target and raise almost £15,000 for the Special Care Baby Unit.

“Since 2009 all of our stores have selected a Local Charity of the Year to partner, and with the support of local communities, we’ve now raised over £11 million. This can really make a big difference to local charities at the heart of the communities where we live and work.

“We are thrilled that the Special Care Baby Unit at Torbay Hospital has benefitted by such a large sum, thanks to the generosity of our local community, and we know the money spent will make such a difference to the lives of so many local people.  For 2016/17 it has just been announced that SCBU has once again been voted Local Charity of the Year, this time jointly with Torbay Hospital’s Louisa Cary children’s ward.”