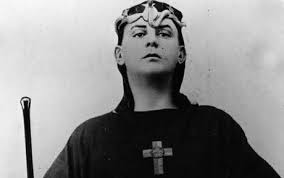 On April 24, 1941, Aleister Crowley wrote a letter to Lady Frieda Harris about his new Torquay venture: “The ultimate aim is to have quite populous Abbeys, with every type of talent represented, so that there will be a body of capable and intelligent people to rule the herd, and save the useful elements in our past civilization from being swamped by it.”

This new Torquay Abbey was the second incarnation of the magician Aleister Crowley’s Abbey of Thelema – a kind of “anti-monastery”. The original in Italy was closed by Mussolini after the death of one of Aleister’s acolytes. The derelict Abbey, which still stands, has been described as the scariest place on earth. 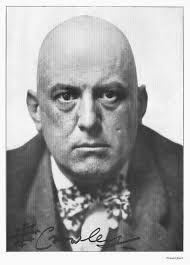 Aleister Crowley (1875-1947) was an influential mystic and magician, responsible for founding the religious philosophy of Thelema. Taking the names Frater Perdurabo and the Great Beast 666, Aleister is known today for his mostly self-published magical writings and is now recognised as one of the most influential occultists of all time.

Seeing himself “in revolt against the moral and religious values” of his time, Aleister proclaimed that he was a bisexual drug “fiend”. He took the motto “Do what thou wilt shall be the whole of the Law”. However, this dedication to excess left a series of deeply damaged women and men its wake. As a consequence, he gained widespread notoriety during his lifetime, and was denounced in the Edwardian popular press as “the wickedest man in the world.”

Facing pressure from the authorities, in 1920 Aleister and Leah Hirsig relocated to Sicily and set up The Abbey of Thelema in a small house (pictured below). This house was used as a temple and spiritual centre, the name being borrowed from a Rabelais’ satire where an Abbaye de Theleme is described as a sort of “anti-monastery” where the lives of the inhabitants are, “spent not in laws, statutes, or rules, but according to their own free will and pleasure.”

The Abbey was Aleister’s commune, a type of magical school, giving it the designation “Collegium ad Spiritum Sanctum”- a ‘College towards the Holy Spirit’. The program was in line with the mystical AA course of training, and included daily adorations to the sun, a study of Aleister’s writings, yogic and ritual instruction, along with domestic labour. The students devoted themselves to ‘The Great Work ‘, the spiritual path towards self-transcendence while manifesting their True Will – a sort of perfect harmony with Nature. 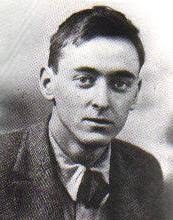 Aleister planned to transform the small house into a global centre of magical training funded by tuition fees. However, this all came to an end in 1923 when a 23-year-old Oxford undergraduate, Raoul Loveday (pictured above), died at the Abbey. Raoul’s wife, Betty May, blamed the death on his participation in one of Aleister rituals, supposedly involving the consumption of the blood of a sacrificed cat. Or it could just have been the consequence of enteric fever contracted by drinking from a mountain spring – Crowley had warned the couple against drinking the water.

When Betty returned to London, she gave an interview to The Sunday Express, attacking Aleister. On hearing sinister rumours about activities at the Abbey, Benito Mussolini’s Fascist government demanded that Crowley leave the country. The Abbey of Thelema was then abandoned – local residents whitewashed over Aleister’s murals.

The derelict Abbey of Thelema today

The villa is still there and Crowley devotee and filmmaker Kenneth Anger later uncovered and filmed some of its murals for his film Thelema Abbey in 1955. Even today ‘Abbey of Thelema’ remains a popular name for various magical societies.

But the ejection of the Abbey’s members from Sicily didn’t stop Aleister. He continued to follow his path and in 1941 relocated to Torquay and established a second Abbey of Thelema. The pursuit of Magick continued- on April 24, 1941, Aleister recorded, “We the undersigned members of the Abbey of Thelema at Barton Brow, Barton Cross, declare ourselves deeply satisfied with the conduct and condition thereof during the passage of the sun through Aries”. 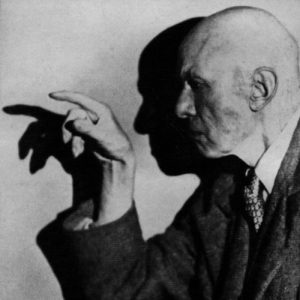 Aleister in his later years

Yet, this was wartime and Aleister struggled to attract the expected adherents willing to pay to learn the occult arts. On April 21, 1941, he wrote, “The Abbey is a bit stagnant; I do wish you would find a couple of suitable people, or a single man, to join”. This Torquay version of Hogwarts failed soon after.

To conclude, here’s an episode of ‘Scariest Places on Earth – Thelema Abbey’, narrated by Linda Blair (Regan in The Exorcist) and Zelda Rubinstein (Tangina in Poltergeist). Fair enough, it’s a bit sensationalist, but Torquay’s most famous magician and self publicist would have loved it!