Stoptober is back to launch its 10th mass quit attempt on 1st October, calling on smokers in England to join the 2.3 million others who have made a quit attempt with the campaign since it launched a decade ago in 2012.

Over 6 million adults in England still smoke, and in the South West, 633,500 adults smoke. Smoking remains the leading cause of premature death, with almost 75,000 preventable deaths a year. 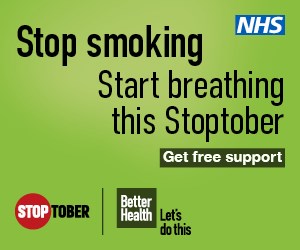 A new nationwide survey of 2,000 current smokers released today has found that nearly half (45%) have been smoking more since the first lockdown began. Key reasons reported are due to being bored in the lockdowns (43%) or the pandemic making them more anxious (42%).

More than two fifths (43%) of smokers surveyed believe that the strength of addiction and/or craving is the biggest obstacle to quitting, followed by the stress of everyday life (42%). More than half of smokers want to quit, and three quarters (75%) would never have started smoking if they could go back in time. Of those who want to quit, more than half (55%) would like to do so to improve their physical health or to save money (52%).

Data from the monthly UCL Smoking Toolkit Study indicates a large increase in smoking among the under-35s since the coronavirus pandemic, up from 18% in 2019 to 24% now.

The disruptive impact of the pandemic on smoking patterns make this year’s Stoptober mass quit attempt more important than ever. Stopping smoking brings multiple benefits to health, some immediate and others that build over time. These include being able to start moving better, being able to breathe more easily and saving money. The average smoker can save £1,875.60, a year by quitting smoking.

Stoptober is based on research that if a smoker can make it to 28 days smoke free, they are five times more likely to quit for good. The campaign first launched in 2012 when one in five adults smoked (19.3%); this has since fallen to one seven in England (13.9%).

Russ Moody, Health and Wellbeing Programme Lead for Public Health England South West said: “Since the pandemic, we’ve seen an increase in 18 to 34 year olds taking up smoking, which is why Stoptober is as vital as ever. Now in its 10th year, it’s supported over two million smokers to give quitting a go.

“Quitting smoking will not only immediately improve your physical health but also your bank balance. Research shows that if you can make it to 28 days smoke free then you are five times more likely to quit for good.“It’s been a tough time over the pandemic for smokers. But the numbers trying to quit is up and the success rate is up. Now is the time to do it! Sign up to Stoptober and make it a success.”

Dr Sarah Jarvis, GP and media medic, said: “Smoking is still the leading preventable cause of premature death. Every cigarette smoked damages the lungs and airways, making it harder to breathe. Smoking fills the lungs with toxins which harm the immune system and leave the smoker more vulnerable to infections – something which has been at the forefront of all our minds over the past 18 months.

“As a Doctor I urge every smoker to give quitting a go this October – it’s never too late to quit – stopping smoking brings immediate benefits to health, including for people with an existing smoking-related disease. There’s loads of support available including expert help from local stop smoking services, quit smoking aids and digital tools. You don’t need to do this alone.”

Leading UK health organisations including The Asthma UK and the British Lung Foundation are joining in the call to get smokers in England to give quitting a go this October by joining Stoptober.

Eluned Hughes, Head of Health Advice at Asthma UK and British Lung Foundation, said: “Quitting smoking is one of the best things anyone can do to improve their overall health. Smoking seriously damages the lungs, putting people at greater risk of developing conditions such as chronic obstructive pulmonary disease (COPD).

“It is vital, now more than ever, that people protect their lungs by giving up this deadly habit. No matter how long you have been a smoker, it is never too late to give up, and if you do already have a lung condition, then quitting is one of the best things you can do to help yourself. As Stoptober marks its tenth anniversary, why not take the first step to quitting for good?”

Smokers are being urged to join the thousands of people who are stopping smoking this October.For free support to quit search ‘Stoptober’.

A new infographic has been released as part of the campaign which highlights the changing smoking landscape in the last decade – https://www.youtube.com/watch?v=FBM-Es7wy3A.