A student has designed new posters for anti-rape campaign #noblurredlines

Design student Bethany Hall, from St Austell, has been awarded first prize by Devon and Cornwall Police for her series of anti-rape posters.  She picked up her award today from Superintendent Jim Pearce at the launch ceremony. 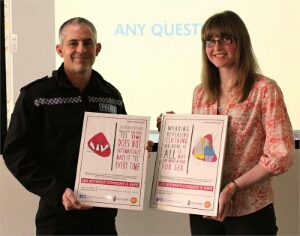 Bethany, who is studying BA(Hons) Graphic Design, entered the #noblurredlines poster competition to help promote police anti-rape messages on campus. Bethany’s designs will be used across the Penryn Campus, which is shared by Falmouth University and the University of Exeter, and Falmouth University’s Falmouth Campus to help spread the word to students that ‘there are no blurred lines when it comes to rape.’ 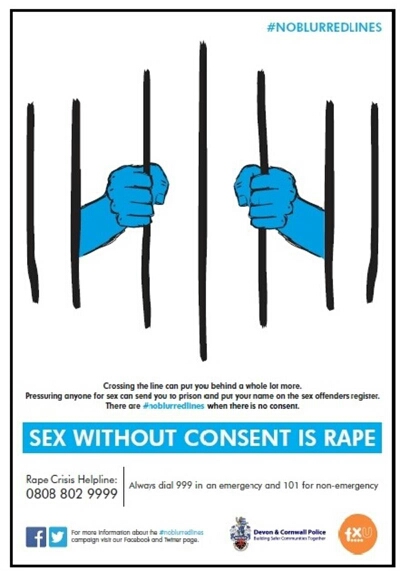 Bethany said: “I thought the tagline for the campaign was very strong but I wanted to make a point about there being no blurred lines when it comes to rape because it is a crime. I thought there should be more than one poster because there were so many perspectives to look from and it didn’t seem fair to prioritise one over the other so I created a series of six. I also wanted the poster to be neutral to gender and sexual orientation to dispel the common myth that rape only occurs to women from a man – that was an important point I wanted to make.”

The poster competition was set up by third year University of Exeter Biosciences student Tilda Dunn, a member of the Falmouth and Exeter Students’ Union (FXU) Feminist Society, who contacted the Devon and Cornwall Police Corporate Communications Department. Students were asked to design and promote thoughtful and original concepts on the issue of consent and #noblurredlines.

This is just one of the initiatives being launched by the police to try and work towards a ‘no rape’ culture in the region. Figures for incidences of rape and sexual offences have steadily risen over the past few years among younger people. Officers are keen to publicise the safety messages and hope that, by using a younger voice, they will reach more teenagers.

If you have been affected and need support you can call 999 in an emergency, 101 for non-emergencies. For help and support visit www.devon-cornwall.police.uk/advice/safeguarding-links/sexual-abuse-rape