A glittering lineup of events is on offer at the 2021 English Riviera Film Festival returning for it’s Seventh annual Celebration of film making in the South West and around the World.

A record number of Worldwide film entries means that there will be double the amount of films screened as in previous years. Some of the previous years English Riviera Film Festival award winners and films have achieved TV, Cinema and film industry success.

This Year’s Awards Ceremony and Screening takes place at the state of art Cinema at South Devon Colleges High Tech and Digital Centre on Saturday November 6th. The Awards are hand crafted by Our Glass in Cockington Torquay and each year we expand amount of categories (think Cannes – Oscars) to win, with twelve awards up for grabs and adding this year the award for Best Film Score. The day is a great opportunity to see great films and meet many of the filmmakers that made them.

The Artizan Gallery in Lucius Street Torquay is hosting four days of screenings as part of this year’s festival. Opening with a special focus on animated films. Plus showing International films and emerging talent from across the UK , including RADA, Colleges across the South West and the Royal College of Art.

We loved to Celebrate Success and have two great events at Torquay Museum. We have a talk from the Film Makers who fulfilled their feature film dream of making an Indie feature length documentary about the legendary 80’s film “Ghostbusters”, they talk about the making of the film, it’s London Imax Premiere and the recent Cinema release in the USA. The second event we have a film Premiere “The Legend Plays On ” exploring the true story of Billy Sutton ( grandson of a Peaky Blinder) who became instrumental in helping the Miami Chief of Police to clean up it’s crime ridden streets in the 80’s. The film was shot across the South West. Billy and many of the Cast and Crew will be in attendance.

Supporting the FilmMakers of the Future at South Devon College we are pleased to welcome back the filmmakers of the year award . With the media students and performing arts students at the college working together to make films in a 72 hour film challenge , with the films and winner announced on the main awards day on the 6th of November.

The Festival takes place from the 1st to 6th November and you can view the full programme at https://erfilmfest.co.uk 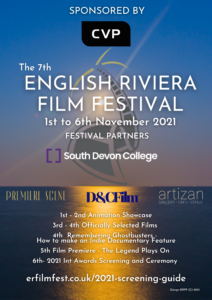 This year’s Sponsor is CVP , one of the largest independent suppliers of production equipment for the Media and entertainment sector in Europe.