David is the former editor of several regional newspapers, and was the managing director of a newspaper company in Birmingham prior to setting up his own media consultancy and journalism training company. This is his eighth book and is certainly an accomplished achievement.

First of all, the title. A funk hole is military slang for a hiding place, especially during a war. David’s theme is the accusation that, during the Second World War, there was a campaign by some national newspapers to label Torquay residents as shirkers happy to do as little as they could for the war effort. There was also the accusation that Torquay was happy to accommodate the idle rich escaping Britain’s cities. The town was regularly named and shamed as one of the black spots where those able to do so could flee from the hardships of war.

David’s objective is to challenge this narrative and he does so in most readable and accessible way. 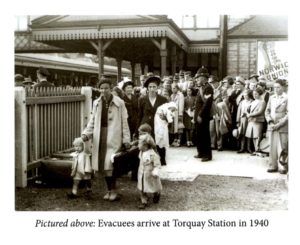 There have been a number of books that have covered the war years in Torquay but none have concentrated on this period in such detail- including interviews with local folk and evacuees who were there at the time. While certainly noting well-covered incidents, the book explores lesser known daily experiences and relates many memories from those dark days, recollections that would otherwise be lost.

This is an essential book for those interested in Torquay’s history and successfully challenges myths, both from the time and more recently, about our role between 1939 and 1945.

This is a limited edition and anyone interested in purchasing a copy should contact David at DScottTorq@aol.com or by leaving their details on 07802786684.