This is a rhino that’s worth its weight in chocolate…

The Cockington Chocolate Company has smothered a medium-sized rhino model in an incredible 15 kilos of quality chocolate for The Great Big Rhino Project. The stunning creation – named Savanna – will be raffled to raise funds for the conservation of Critically Endangered rhinos.

Paignton Zoo spokesperson Phil Knowling said: “One kilo of rhino horn fetches around $65,000 on the black market. If this was rhino horn rather than chocolate, it would be worth $975,000. It’s a sobering thought.”

Chocolatier Tony Fagan based his extraordinary creation on one of the Project’s standard medium-sized fibre-glass rhinos. “I then sculpted the horn, ears, ribs, folds and eyes working from photographs – I wanted it to look as real as possible.” The Belgian chocolate used is certified palm oil free. 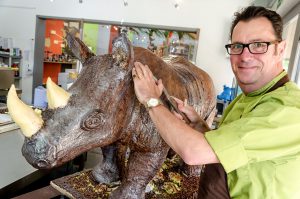 Raffle tickets for Savanna will be sold over the summer from both Paignton Zoo and the Cockington Chocolate Company’s workshop. The winning ticket will be drawn in September; one lucky contestant will walk away with the medium-sized rhino model and the 15 kilos of chocolate – if they can carry it!

The Great Big Rhino Project is a celebration of over 90 years of conservation and education at Paignton Zoo, aimed at engaging communities with a mass exhibition of public art to raise awareness and funds to help Critically Endangered rhinos

The Great Big Rhino Project will provide a free public art trail around the streets, parks and open spaces of Exeter and the English Riviera, encouraging thousands of people to enjoy the spectacle. The Great Big Rhinos come alive on Saturday 30th July 2016. Money raised will be channelled through Save the Rhino International.