The Press Gang in Torbay

During the wars against Napoleon the villagers of Torbay could be forced into joining the Royal Navy.

It wasn’t always so.

While working and living conditions in the Royal Navy were harsh, at normal times there were many volunteers for naval service. The work for individual sailors was often less than on merchant ships – naval crew size was determined by the number needed to man the guns, around four times the number of crew needed to sail the ship. Volunteers were further paid a bounty upon joining, two months’ wages in advance and a higher wage than on a merchant ship. Also, volunteering protected the sailor from creditors, as the law forbade collecting debts accrued before enlistment.

Areas with a naval connection produced high numbers of volunteers. Between 1793 and 1801, 53% of Royal Navy volunteers were English, with Devon having the second highest number at 6%- after London’s 10%.

Maintaining a steady supply of men between 1795 and 1815 was the Quota System, where each county was required to supply a certain number of volunteers. One problem with this was that counties offered convicts the option of completing their sentence or volunteering. This not only gave lower quality recruits but introduced diseases such as typhus.

Accordingly, Britain needed to find crews for its ships for its wars with France from 1793 to 1815. And so an impress service operated- the taking of men into the Navy by compulsion. Those liable to impressment were “eligible men of seafaring habits between the ages of 18 and 55 years”.”Failure to allow oneself to be pressed” was initially punishable by hanging, although the punishment became less severe over time.

By the Battle of Trafalgar in 1805 over half the Royal Navy’s sailors were pressed men. It’s further likely that among the ‘volunteers’ were pressed men who redefined themselves to get the sign-up bonus.

Most pressed men came from the Royal Navy’s practice of taking seamen from inbound British merchant ships or fishing boats. It was legal as long as the Navy replaced the man they took. Naval captains would often take the best seamen, replacing them the less able from their own ship. It was also known for loyal navy men to act as substitutes who would then return to their navy ship at the first opportunity.

In 1805 the navy waited for the fleet to return from the Great Fishery on the Dogger Banks. 96 fishing smacks were boarded by tenders waiting off Torbay and so many men were seized that room could not be found for them on board the navy’s ships. It was later reported that the sea interceptions had been so thorough that there was, “Not a single man found in Brixham liable for the impress”. 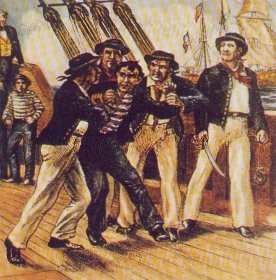 This was such an imposition on merchantmen that many ships had hiding places constructed where their best crew could hide when approached by a naval vessel. Other captains redirected their ships to Irish ports to offload favoured crewmen, before making final land-fall in England.

On land those undertaking this forcible recruitment were the press gangs. They operated in cities and coastal towns and, as many seamen crossed the country by stagecoach or wagon, gangs were also stationed at Okehampton, Liskeard and Exeter.

Usually led by a naval officer, seafaring men were recruited as part of the gang but landsmen were also used – one gang consisted of only two sailors, but three farmers, one weaver, one bricklayer and one labourer. Apart from the officers commanding it, the number of men varied from two to twenty or more depending on the need and the reputation of the community they were planning to enter. An ability to fight was more important than background.

On shore merchant seamen and fishermen were conspicuous. There was, “no disguising the fact that the sailor was a sailor. He was marked by characteristics that infallibly betrayed him. His bandy legs and rolling gait suggested irresistibly the way of a ship at sea, and no soaking in alehouse or tavern could eliminate the salt from the peculiar oaths that were as natural to him as the breath of life. Assume what disguise he would, he fell under suspicion at sight, and he had only to open his mouth to turn that suspicion into certainty.” The potential recruit would first be asked to volunteer for naval service- if he refused “he may be plied with alcohol or simply seized and taken”.

Although the power of the Impressment Service to conscript was limited by law to seafarers, this was a broad definition with around a quarter of the Bay’s adult male population being at risk of impressment. There was a widespread fear that civilians without any seafaring background were being taken away, a belief that was confirmed when on May 6 1803, “shipwrights, a fishmonger, coal factor, grocer, cooper, ostler, shoemaker, constable, basket maker and many more” were taken in Brixham. All these men, however, had to be released because they were not seamen.

It looks as though the Brixham folk were lucky. Court records show fights breaking out as people attempted to avoid wrongful impressment, and The Times reported occasions when press gangs instituted a ‘hot press’ (ignoring protections against impressment) in order to man the navy.

Impressment was often resisted by local officials who imprisoned officers from the Impress Service, or opposed them by force of arms. The local populace would also band together to oppose their activities. In the 1803 Easton Massacre a press gang, attempting to impress local quarrymen, fired on a crowd, killing four people in the village of Easton further up our coast on the Isle of Portland. Nevertheless, impressment was repeatedly upheld by the courts, as it was deemed vital to the war effort.

So why was Brixham targeted by the press gangs?

In a reversal of our present day centres of the Bay, Brixham was the largest town with a population of around 3,700. In contrast, Paignton had 1600 residents and Torquay only 800. 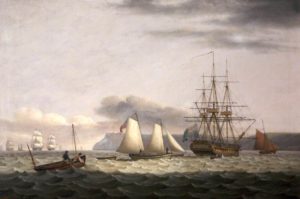 As a maritime town had many seafaring in its streets and there may have been more opportunities for the press gangs to operate anonymously in a larger community. The town supplied the fleet and had an almost Wild West feel which even required the setting up of a marine guard to prevent, “scenes of drunkenness, obscenity, blasphemy and consequent casualties (by the men fighting with each other and falling over precipices) which, to the disgrace of His Majesty’s Navy obtained heretofore in watering the fleet at Brixham.” In contrast outsiders would have been more obvious in smaller and quieter Paignton and Torquay.

The threat from impress was significant in a Bay often filled with ships hungry for new recruits. It was said that in response to this ongoing danger Brixham’s fishermen designed small boats with a crew of two men and two boys to evade the press men. 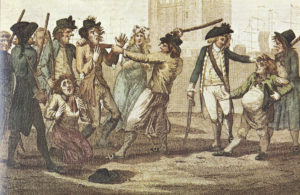 Of course, while the navy could forcibly recruit, it often quickly lost many of those it seized. There were high levels of desertion with rates on naval ships averaging 25% annually- with surprisingly little difference between volunteers and pressed men. Admiral Nelson in 1803 noted that since 1793 more than 42,000 sailors had deserted.

The activities of the press gangs inevitably gave rise to legends. One is that a trick was used in taverns where a recruiter would drop a Kings shilling (‘prest money’) into a man’s drink so he was deemed to have volunteered. This then led tavern owners putting glass bottoms in their tankards. This one isn’t true- impressing officers were subject to fines for using trickery and a volunteer, in theory at least, had time to change his mind.

The years when the press gang could intimidate the population of Torbay came to an end with the surrender of Napoleon in 1814. Britain no longer had the need to impress sailors and never again used that means of forced recruitment.

And, as all history has a sound track, here’s William Pint singing ‘The Press Gang’:

Bridgwater Carnival 2020 cancelled due to coronavirus

Bridgwater Carnival 2020 cancelled due to coronavirus