Alfred Hitchcock was right- they are out to get us… (*)

At the topmost part of the 1893 Torquay Arms stands a proud gull. It demands its place as being top of the food chain in our town, and warns of the perils of being positioned below it.

Notably, there’s no such thing as a happy-looking gull. They’re angry and bitter about something and show it. They were here first and want the Bay back. We used to know about this resentment – sailors from medieval times avoided the gull’s gaze as the birds harboured a grudge and would peck out the eyes of any dead that had offended them.

These days we have a more benign view of our omnipresent neighbours. Many Bay residents watch seagulls to predict the weather, some of us seeing gulls wheeling high in the sky and moving inland as a away to predict a storm approaching from offshore.

But they aren’t just volitant scavengers of the things we leave behind – a kind of aerial Womble to be seen cruising Fleet Street’s concrete canyon. These flying dinosaurs are the ultimate scavengers- evolution having crafted the perfect eating machine. They define the term omnivore, consuming whatever they can find.

We’ve taken them to our heart in Torquay United’s mascot of Gilbert the Gull, but don’t be fooled. They aren’t our Disneyfied feathered friends. We know that seagulls attack and eat pigeons and other birds, and even feed on each other- many fledglings are snatched from their nests and some are even gobbled down by their own parents. And if they were larger, or we were smaller, we mere humans wouldn’t be able to leave our homes without becoming a Torbay takeaway. 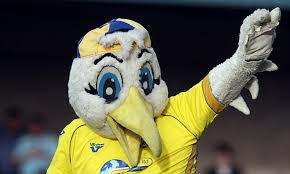 In 2019 it was reported that a Chihuahua was snatched from his backyard in Paignton by a seagull – that small dog went by the name of Gizmo. In 2015, Cornish seagulls attacked Room, a Yorkshire terrier whose wounds were so extensive he had to be put down. The same year a 20-year-old tortoise called Stag died after being flipped upside down and pecked by a flock of gulls – his owner Jan said the attack on her pet was, “like a scene from a horror movie”.

Many of us have had the ice cream plucked from its cone by these avian opportunists, or even food snatched from our very mouths. Claire Field, a community pharmacist based in Cornwall, reported cut lips and tongues among the injuries reported to have been caused by gulls. “We have even seen adults and young children with cuts around and inside their mouths as well as their hands where sneaky seagulls have swooped down to take their food.” Incidentally, there is a belief that people with red hair are more likely to find themselves being dive-bombed by gulls. 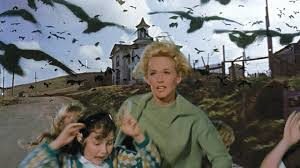 But before we become too paranoid about those beady eyes and imagine some kind of malicious hive mind, these types of incidents are rare and not typical gull behaviour. Gulls don’t randomly attack people or other animals. They will defend their nest and chicks if a person or animal comes too close – the distance varies from nest to nest. They usually just swoop and scream, however.

The term seagull covers a number of species and refers to any that belong to the family Laridae. Seven of these varieties are known to breed here, with at least ten other species being sporadic visitors to our shores. Indeed, the term seagull is increasingly a poor name, because seagulls aren’t found exclusively by the sea. They are often found inland, and can thrive in both fresh and salt water areas. As gulls are a familiar sight across the UK, many places have local nicknames that reflect their plumage or behaviour- the Torbay colloquialism sounds something like ‘white hawk’…

Optimistic ornithologists would have us believe that gulls are just another therapod that got lucky. But all along they managed to secure a prominent presence in human history. In Greek mythology, seagulls were incarnations of the goddess Leukothea, ‘the white goddess’, while Icarus made his wings from gull feathers- and we know how that ended.

A hovering almost motionless gull resembles a cross, so their presence has taken its place in Christian mythology. St. Kenneth was raised by gulls after being found floating off the coast of Wales as a baby in about 550AD – they carried the saint to their breeding colony and built him a feather bed. 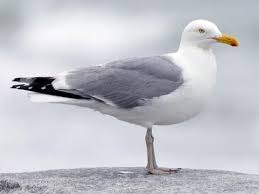 Sailors’ superstitions about gulls are common around the world, such beliefs being based in the inherent risks of seagoing – still amongst the most dangerous jobs. Mariners have always observed seabirds for subtle changes in weather or closeness to land and this relationship has led to a variety of beliefs. For example: gulls were seen as the souls of those drowned at sea; three gulls flying overhead together are an omen of death; to kill a gull brings bad luck; fishermen should always free a gull caught in nets immediately; a gull hovering outside a sailor’s window when he is away is a sign that he is in danger.

And over in the US the Church of Jesus Christ of Latter-day Saints, often known as the Mormons, have a statue memorializing the 848 tale of white seagulls gobbling down swarms of black crickets to save the Mormon pioneers from starving in the Salt Lake Valley. The Mormons then came to view the gull’s actions as divine intervention, and in 1955 the California Gull was named Utah’s state bird.

We have certainly seen an attempt at the rehabilitation of the gull. Richard Bach’s book ‘Jonathan Livingston Seagull’ is a modern cultural legend that reinforces that essence of freedom the seagull is known for. Also, gull sympathisers associate them with human qualities such as: family; freedom; adaptation; intelligence; opportunism; resourcefulness; and communication. Their tendency to pick over wastelands of trash we’ve left behind has further become a symbol of recycling in our environmentally-aware age.

At one time, it was assumed that gulls were foolish. There was supposedly a connection to English words like gullible- that they would swallow anything. Now we know the word has another origin, so maybe that’s what they want us to believe as they draw their plans against us… 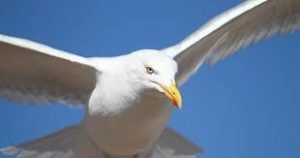 And it may have been the gulls themselves who put out the long-held belief that if you feed them an indigestion tablet, they will violently explode. The theory is that seagulls are unable to pass wind, and the indigestion remedy therefore causes a build-up of gas in the seagull’s stomach. It isn’t true – gulls regurgitate their food, and could easily evict anything they don’t find digestible. Though perhaps they secretly yearn for Alka-Seltzer and we’ve been set up once again.

So it shouldn’t be a surprise to find that gulls prefer to eat food touched by humans. We we’re just their terrestrial food tasters all along. When they finally do take over we will recognise what our ancestors knew all along and were trying to warn us about in that 1893 Torquay Arms… keep watching the skies.

(* This isn’t to be taken entirely seriously. I do actually like the diminutive seaside Satans)

Police concerned for welfare of woman last seen in Torquay

Police concerned for welfare of woman last seen in Torquay