During the 1920s people in Torbay started taking their clothes off. They had decided that they wanted to change the colour of their bodies. 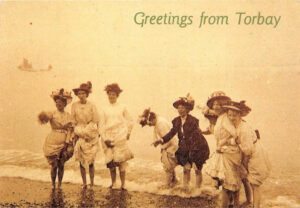 Back in 381AD the Roman Emperor Theodosius made Christianity compulsory in the Empire and from then on Christian views on modesty dominated women’s apparel, including requiring the covering of the body and often the hair. Indeed, for several thousand years, pallor was popular with the upper classes with the ancient Greeks and Romans even using whiteners to create a pale skin. 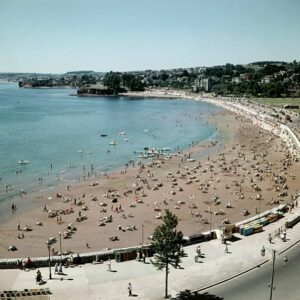 Having a fair skin let others know that you could afford an indoor life of leisure. In contrast, dark skin was associated with serfdom and toiling in the fields. When Elizabeth Bennett, the heroine of Jane Austen’s ‘Pride and Prejudice’, acquired a mild tan after a country walk, she caused a bit of a scandal. Right up until the early 1900s, it was accepted that women would shield themselves with parasols, hats and gloves.

This had begun to change in the late nineteenth century as pale skin became once more associated with the lower classes. Urbanisation meant that folk had moved into cramped houses, leisure was taken indoors, while many worked in mines and factories. At the same time it was becoming known that the sun was actually good for you. In 1890 Theobald Palm recognised that sunlight was crucial for bone development, showing there were social and medical reasons to be outdoors. In 1903, physician Niels Finsen was awarded the Nobel Prize for medicine for his ‘light therapy’ which aimed to combat diseases such as rickets and tuberculosis. 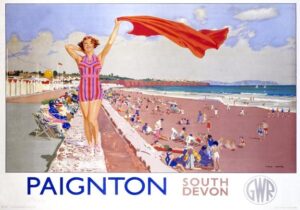 Although Victorian sea bathing was accepted as improving the quality of life, the practice was to cover up and reveal little. Nevertheless, this was an outdoor summer activity that relished the sunshine and the warmth and, while pale skin had been the mark of privilege, tanned skin began to proclaim that you had the time and money to darken your complexion.

So society’s views were changing. The apocryphal shift took place in 1923 when, after mistakenly catching the sun, iconic French designer Coco Chanel displayed bronzed skin. Her friend, Prince Jean-Louis de Faucigny-Lucigne, pronounced, “I think she may have invented sunbathing.”

French beachside resorts started to remain open throughout the summer, their usual off-season, which led to the advent of sunbathing as a pastime for the rich and stylish, such as Cole Porter, Scott Fitzgerald, and Rudolf Valentino. Within a few years the character of the Riviera had changed and become a year round destination. 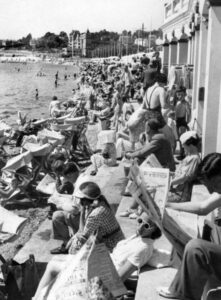 From the mid 1920s magazines featured suntanned women and fashion promoted the idea of underdessing rather than overdressing. Swimwear started decreasing in coverage and by the summer of 1924 new bathing suits were introduced that were backless and had the arms and legs exposed. Jean Patou introduced the first tanning oil in 1928; and in 1929, Vogue declared that the “sunburn movement” had created a whole new industry entirely for the purpose of acquiring or displaying a tan. 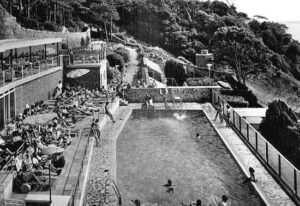 This was a time of reaction to Victorian conservatism and the shock of the Great War. It was the era of the Charleston dance and the flapper, of shorter hemlines, less restrictive corsets, and the hedonism of smoking, drinking and partying. Bronzed legs and shoulders were a way to display this new freedom. 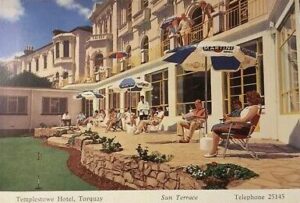 Torquay, always eager to replicate the look and feel of the Rivieras, eagerly took up the new activity and by the mid-1920s sunbathing had become a health craze. The trend also influenced the town’ architecture, with balconies, sun terraces, and flat roofs, all facilitating sunbathing. 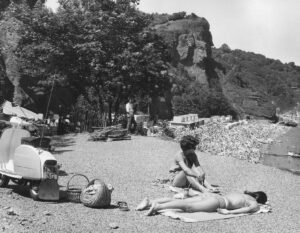 By 2000, a survey showed that 50% of Britons said that returning with a tan was the single most important reason for actually going on holiday.

Yet, there was a downside to a life on the beach or in the salon with a growing understanding of the dangers of tanning. In 2009 it was found that rates of malignant melanoma in the UK had more than quadrupled in the past 30 years and that it is now the most common form of cancer among those aged 15-34. And so there came another reaction…