We have a couple of 1870 prints entitled ‘The Strand’;’ and ‘Torquay Morning Promenade in the Paignton Road’. Both these street scenes show women using hand muffs. 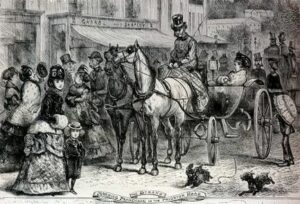 As seen in these two images, a muff is a cylindrical fashion accessory for outdoor use. Both ends are open for keeping the hands warm. The term comes from the Old French moufle meant a thick glove or mitten.

While the parasol was one of the primary promenading fashion items of Torquay’s summer months, the muff fulfilled the same role when the weather was less amenable. Torquay was a winter resort for the aristocracy and, for many years, the muff took on the role that would be assumed for later generations by the fur coat.

Muffs first became fashionable in the 1500s when long, wide sleeves went out of style. This exposed the hands to the elements and the muff was the solution for both women and men. For instance, on Sunday 30 November 1662, Samuel Pepys noted the “bitter cold” and decided to borrow one of his wife’s accessories to keep warm: “This day I first did wear a muffe, being my wife’s last year’s muffe, and now I have bought her a new one, this serves me very well.” 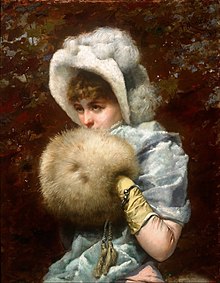 Eventually, however, muffs became increasingly seen as effeminate and unacceptably French. They then became the preserve of women.

They are certainly practical, highly effective and multi-use. They solved the problem of ladies’ cloaks and capes not having pockets. The tight insulation of the wrap would keep the fingers warm, especially considering that hands were often also gloved. Some were designed to be used with a ceramic flask filled with hot water while variations doubled as a convenient purse. 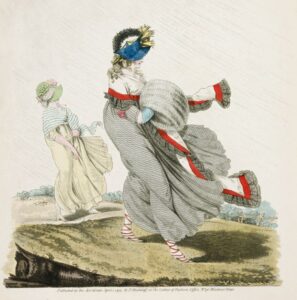 Inevitably muffs moved beyond their practical use to become a symbol of wealth and status. Many were made from expensive furs and animal skins such as fox, mink, and feathers, and so the accessory was generally the preserve of upper-class women; both Jane Austen’s ‘Sense and Sensibility’ and ‘Northanger Abbey’ contain references to muffs indicting their high social status.

There were other, less obvious, messages here. Wearing a muff prevented movement of the arms and proclaimed that their owner did not have to engage in labour or exertion of any kind. They further demanded a stance that suggested modesty, reserve, formality and good manners.

Suggesting their emblematic nature, we have many portraits and posed photographs of Victorian upper-class women with their muffs. These images were captured indoors so there seems to be no obvious reason why a winter accessory should be included- all other outerwear was relegated to the cloakroom. 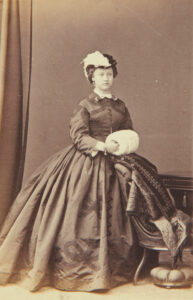 As an example, we have a photograph of Queen Victoria’s daughter, Princess Louise, with her muff. On May 6th, 1890, the Princess laid the foundation stone for Torquay’s new promenade, named Princess Gardens in her honour, reinforcing the link between the aristocracy, promenading and fashion. In summary, we are looking at an important status symbol imbued with meanings that would have been understood by all.

As with other nineteenth century fashions, the muff lost some of its popularity after the Great War. One reason was that large fur coats, with warm pockets came onto the market. Women were also becoming more physically active both at home and in the workplace, making the constraining muff less desirable. 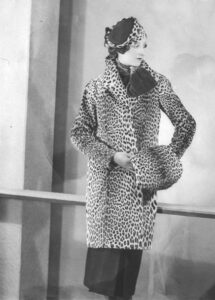 There was a revival, however, in the inter-war period, possibly as the war and depression had made animal fur coats less available; much less fur is needed to make a muff. They again became highly fashionable, with many Hollywood stars photographed wearing them, and even more of a luxury item than they were before. In 1935, for example, Torquay’s Debenhams was offering a leopard fur coat with matching hat and muff.

After the Second World War they fell out of use. Women’s lives had been transformed during the twentieth century, and no longer would a garment that was so restrictive – making it hard to access a purse, use a phone or drive a car – be of any use.

Torquay had just moved on. The muff is unlikely to make a comeback any time soon.

We couldn’t conclude without acknowledging that there is a double-entendre here. Surprisingly perhaps, this risqué sobriquet originated in the late 1600s and continued its indecent use for centuries. Accordingly, there may be something going on more than the merely vulgar.

It’s also noticeable how many Victorian cartoons – drawn by men – ridiculed the muff and the women who wore them for their clothing choice. One suggestion is that this reflected a subconscious concern that women were becoming more visible and asserting their independence. Such sustained abuse and ridicule is, therefore, to be seen as part of a push-back against social progress.