During the mid nineteenth century Torquay was beginning to lose its image of being a substitute inland spa, to becoming a holiday resort. Instead of the cultivation of good health, the town was changing to become a place of pleasure. Yet it was still select- few could afford the time or money to travel by coach or by steam ship to access Devon’s south coast.

In the early part of the century Torquay was still little more than a cluster of villas built on hillsides in order to attract the upper classes. These villas were, admittedly, different from the fishing communities of earlier days. For one thing, the new houses faced the sea rather than turning their backs for protection from the elements, yet we were still a small and sedate town.

This all changed with the opening of Torre Railway Station on 18 December 1848 – the more coastal Torquay station following on 2 August 1859. Suddenly hordes of people descended on Torquay. This was a culture shock for the middle class resort as many of these new visitors weren’t the kind of folk that the town was expecting.

Torquay – alongside Eastbourne, Bexhill and Frinton – wanted to remain an elite resort. It didn’t want to emulate the likes of Southend, Margate, Llandudno, Brighton or Clacton, with their mass working class clientele and culture.

But still they came and there was often insufficient accommodation. In 1850 there were only 150 hotel rooms available in Torquay, with a further 70 lodging housekeepers offering another 350 rooms. 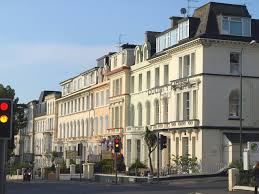 From the 1860s onward, to cater for this new demand, there was a rapid growth in hotel building for the well-off, and they advertised themselves with prestigious titles: The Imperial; The Grand; The Royal.

But for those with fewer resources there were limited alternatives. When visitors arrived at Torquay Station they were greeted by enthusiastic cab drivers promising accommodation, with prices giving an approximation of quality… though the commission-hungry drivers would often exaggerate.

Most lodging was in private houses, with higher quality and prices for genteel visitors. Other private houses were for working class visitors. Most were run by landladies who provided no food but were prepared to cook the food provided by their tenants- after sometimes skimming some of what they were given. The alternative to the lodging house were houses where food was presented at communal tables. Hotels would often not take children, so families were relegated to these types of accommodation. 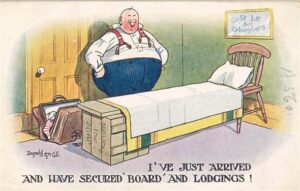 Charles Dickens and William Makepeace Thackeray wrote of how poor seaside accommodation was: the people were dreadful; the landladies dishonest; and the food appalling. There were often inflated prices and hidden costs.

Canadian Isabella Cowen and her sister visited Torquay in 1892 and recorded in her diaries that she first found furnished apartments at 38 Abbey Road. They weren’t impressed and called their apartment, a “queer dark place”. Soon after they moved to 6 Torwood Terrace on Babbacombe Road where they found “the society of refined and intelligent neighbours”. However, having informed their landlady at Abbey Road that they were leaving, they believed that she took offence and retaliated by interfering with the sisters’ mail.

There are many reports, cartoons and songs about how lodgings were run-down and dirty. A particular feature were bed-bugs. One well-known ditty ran:

“I am a bug, a seaside bug
When folks in bed are feeling snug
About their skin, we walk and creep
And feast upon them while they sleep
In lodging houses, where we breed
And at this season largely feed.” 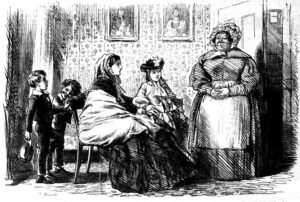 In March 1893 the children’s author Beatrix Potter visited Torquay. She found her accommodation unsatisfactory:
“I sniffed my bedroom on arrival, and for a few hours felt a certain grim satisfaction where my forebodings were maintained, but it is possible to have too much Natural History in a bed. I did not undress after the first night, but I was obliged to lie on it because there were only two chairs and one of them was broken.” 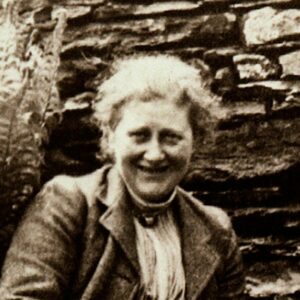 But was it all worth the journey?

When the Spectator Magazine’s James Pope Hennessy visited in 1947, he reported, “The whole town was swarming with holiday-makers, only they did not seem to be making holiday. There was something unduly oppressive in the empty, questing faces of the crowds that shuffled and shambled through the sunless, hot but steep and windy streets. They had nothing to do, it seemed, because there was nothing for them to do”.

Over a century and a half the seaside landlady became the stuff of legend. She – and it always was a ‘she’ – seems to have become extinct in our highly-competitive Bay tourist industry… unless anyone knows differently?