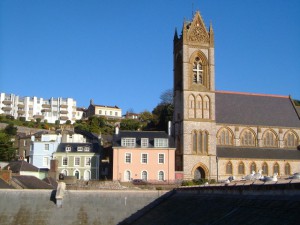 “What is the shadow that passes me in the back kitchen and walks across the yard into the church?”

It’s often said that England has more ghost stories that anywhere else in the world. Add to this the recent survey which found Torquay to be the ghost-sighting capital of the nation. And, since our town has such a surfeit of spectres, it shouldn’t then be surprising that one building near the harbourside has hosted three apparitions with a musical bent.

Indeed, we appear to be known internationally for our supernatural phenomena. The Chicago Tribune of October 25 1956, for instance, ran an article titled, “The vicar swears he heard a ghost playing the organ.” This particular vicar was Torquay’s Reverend Anthony Rouse who went on to say, “When Henry plays the organ you can see right thru him.” Anthony was further quoted, “’I have heard the organ play twice at night. The music is sweet but sort of heavy. Quite a few members of the choir have been conscious of someone standing by the organ when they were singing unaccompanied, as if the organist had got off his stool and was at their side’”. 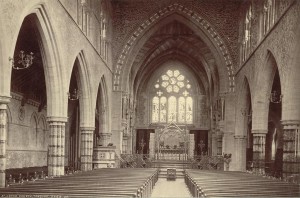 The focus of the haunting was St John’s Church which overlooks Torquay harbour. It all began on 19 November 1883 at the funeral of Henry Ditton-Newman. Henry died from pleurisy at the age of 39 and was to be buried in Torquay Cemetery. He was the organist of St John’s and wrote hymns, a collection of which were published after his death. According to reports, poor Henry hadn’t completed his musical career at the time of his death and was seen to play the organ at his own funeral. This was supposedly witnessed by the vicar, the Rev. Mr. Hitchcock, who saw and heard the recently-deceased organist sitting at the console and accompany the singing. Intriguing reports of supernatural organ playing and unearthly footsteps then went on for years. Over the decades the reports of Henry’s appearances faded, though they became more common again in the 1930’s – as we know, tourists love a good ghost story.

The ongoing haunting of St John’s came to national notice via an article in The Living Church magazine in 1956. The then Vicar Reverend Anthony Rouse announced he was having “an 80 year old haunted organ removed in the hope that the ghost who plays it will go too.” It was said that the church had trouble retaining its musicians and “one temporary organist has refused to play because he could feel someone sitting in the organ stall with him. The vicar and several churchgoers say the old church organ often plays at night when there is no one in the church. Mr Rouse also says he has heard mysterious footsteps in the church…. He twice held special exorcism services in the church and has now decided to remove the organ.”

Unsurprisingly this report caught the attention of the national and overseas press, hence the Chicago Tribune article, though it looks like Anthony subsequently attracted some criticism for the eviction of Henry the friendly ghost. The ‘true’ reasons for the organ’s removal were then given at a meeting of the Exeter and Torbay groups of the Church Fellowship for Psychical Study and reported in The Living Church magazine in 1957. Anthony clarified that the organ replacement was necessary for non-supernatural reasons: “The organ was worn out. That was the only reason that it was being removed”. 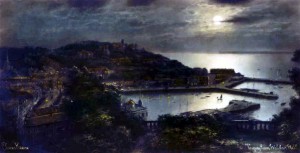 Our attention-seeking vicar, having belatedly injected a note of rationality to proceedings, then further excited the media by providing a long list of his experiences of his haunted church: another organist from the neighbouring parish of St. Mary Magdalene, Upton, had reported that those playing the organ at St. John’s sometimes had the feeling that an unseen force was guiding their fingers; Charles Downey, the parish clerk, while playing the organ one night, heard a sound “as though someone with a large key was rattling it up and down the organ pipes.”

Yet, the late Henry Ditton-Newman seems not to be the only tuneful spirit. Another supposed apparition was a later organist, Francis Crute, who allegedly committed suicide in 1953. After Francis’ death there began to be reports of his ghost being seen. There’s also a third sighting – the original clerical witness at Henry’s funeral appearance, the Reverend Hitchcock. Predictably, the Reverend died whilst working on a composition, and was to be heard playing the unfinished piece during the 1950s. We’ll never know who was responsible for what – the problem with invisible spirits is, of course, that they rarely identify themselves. 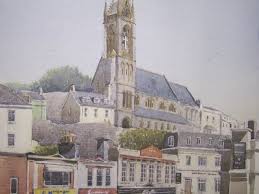 The Church of England authorities arrived to investigate and unsurprisingly dismissed the reports of Henry haunting the church. Indeed, there appears to have been some embarrassment amongst the Church authorities about the fuss being caused. Other, more earthbound, explanations were then put forward – the Revered BG Burr, for instance, made the unlikely suggestion, “There was at that time an almost blind parish clerk who used to play the organ for his own amusement without bothering to put on the lights”. It may be worth noting that we’re not the only ones to have a melodious apparition – there are at least ten examples of ghostly organ music being played in religious buildings in Britain. 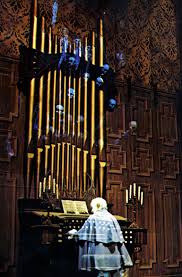 On the other hand, despite the scepticism of his superiors, Anthony did receive the approval of the Bishop of Exeter for a sprinkling of holy water and the saying of special prayers at the grave of Francis Crute in January 1959. The Church was also said to have blessed the Reverend Hitchcock’s grave in the same year – it’s possible that the two deceased had become confused in the telling of the story. After the blessings of the grave (or graves), the ghosts seem not to have returned. In any case, others say that the hauntings had already ceased due to the organ being rebuilt in 1957.

The paranormal happenings weren’t confined to the church, however. Next door to St Johns’ is Montpellier House, a former Choir School which was converted into the vicarage (pictured below). Anthony’s predecessor, the Reverend Sir Patrick-Ferguson Davie, also heard otherworldly footsteps. One night they were so bad that he thought a burglar was responsible. He got out of bed armed with a riding crop, chased the ‘man’ down the stairs to find nothing. Other locals were similarly aware of a presence – a Mr Sproule, who worked as a sort of apprentice to Sir Patrick, saw the ‘man’ frequently, though it was agreed that the servants, “didn’t mind him a bit. They liked him”. 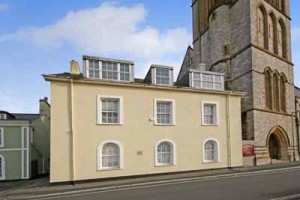 Anthony Rouse had been at Montpelier House for a fortnight when he first heard the footsteps. The Reverend’s manservant also both saw and heard the ghost and knew a place on the top floor where “the atmosphere was most extreme”. A servant, after being in the house for three weeks, asked, “Who is it who walks down the back stairs at night?” Another enquired, “What is the shadow that passes me in the back kitchen and walks across the yard into the church?”

Despite being the primary source of the stories of the 1950s haunting, Anthony insisted that he wasn’t particularly alarmed. “The only reason it has bothered me is that I don’t like my sleep being disturbed and I didn’t like people who work for me to be unhappy. I have never felt as though there is anything evil in it. I have never felt that this is a bad apparition”.

Regardless of how benign the spectres were assumed to be it was decided that action needed to be taken. Accordingly, a Mrs Thornley, “a spiritual woman” held a service on the top floor of the vicarage where “the atmosphere was strongest”. Then Anthony sprung into action, “Last February I myself went to the top floor and I used holy water and said some prayers. Since then nothing has happened.” 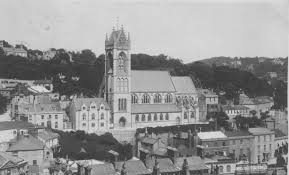 Nevertheless, while the sightings ceased, the stories of the St John’s infestation aspired to a(n after) life of their own – for instance, in 1963 Oregon’s ‘Eugene Register Guard’ featured the curious events in an article entitled ‘British ghosts haunting still’.

So that’s the story of the three musical ghosts of St Johns’. To this day some visitors still comment on feeling uneasy in the church, but the actual hauntings now seem to be over… unless anyone knows any better?