In 1346 the villages of Torbay took part in the siege and capture of Calais.

It was recorded that ‘ The Port of Dartmouth’ provided 31 ships and 757 men for the campaign – while Plymouth only found 26 ships and 603 men.

Here’s the story of our part in the Hundred Years War. 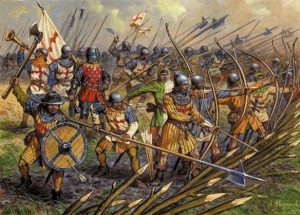 On 12 July 1346 an English army of some 10,000 men under the command of King Edward III landed in northern Normandy. They embarked on a large-scale raid, or chevaunchee, devastating large parts of northern France. On 26 August, while fighting on ground of their own choosing, the English inflicted a heavy defeat on a large French army led by King Philip VI at the Battle of Crecy.

A week later they laid siege to the well-fortified and garrisoned port of Calais.

Edward made several unsuccessful attempts to take the town by assault, either from the land or seaward sides. The French initially held out – during the winter and spring they were able to carrying on supplying the town with food and reinforcements by sea. However, in late April the English established a fortification which enabled them to command the entrance to the harbour and cut off the further flow of supplies. 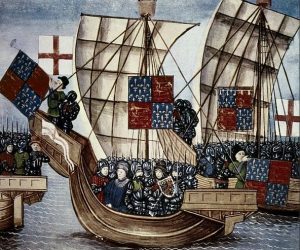 On 25 June, the French garrison wrote to Philip stating that their food was exhausted. In response, on 17 July Philip marched north with a relief army estimated at between 15,000 and 20,000 men – confronted with a well-entrenched English and Flemish force of more than 50,000, he withdrew. 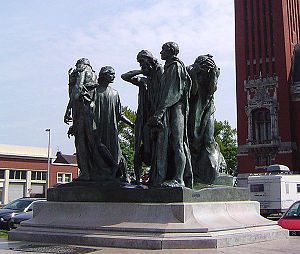 With no hope, on 3 August Calais capitulated. The entire French population was expelled and a “vast amount of booty was found within the town”. After Calais was emptied, Edward repopulated the town with English settlers. The sparing by Edward of the town’s population was commemorated in ‘Les Bourgeois de Calais’, a sculpture by Auguste Rodin (pictured). The surrender of Calais gave the English an important strategic base for the remainder of the Hundred Years’ War and beyond.

During this campaign, the ‘Port of Dartmouth’ was regarded as the third most important in the kingdom. Notably, in 1373 Geoffry Chaucer visited and among the pilgrims in his Canterbury Tales was: “A schipman was ther, wonyng fer by weste; For ought I wost, he was of Dertemouthe.”

Those 31 ships and 757 provide by the siege by the ‘Port of Dartmouth’ could not refer just to the town itself – the entire population was only 1200 in the mid fourteenth century. ‘The Port of Dartmouth’ meant, “the whole of the district embraced in the king’s fiscal port and not the haven alone.” So it is very likely that some ships and men came from the small seafaring villages of the Bay. 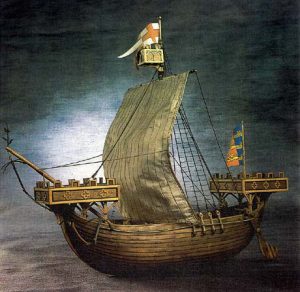 Calais was regarded for many years as being an integral part of the Kingdom Of England, with its representatives sitting in the English Parliament. In 1360 the Treaty of Bretigny assigned Guines, Marck and Calais – collectively the ‘Pale of England'” – to English rule in perpetuity. The town came to be the “brightest jewel in the English crown” owing to its great importance as the gateway for the tin, lead, cloth and wool trades or ‘staples’ – its customs revenues amounting to a third of the English government’s revenue.

Calais was not recaptured by the French until 1558.