They look almost prehistoric. A cruciform black silhouette with wings resembling a broken umbrella. This is the cormorant, a bird familiar to the Bay.

The name is thought to originate from the Latin words Corvus and Marinus meaning ‘sea crow’, while the bird’s Irish name, cailleach dhubh, translates as ‘the black hag’.

There’s around 40 species of these aquatic birds known as corm orants and shags, the majority of which have dark feathers and all are fish-eaters, catching their prey by diving from the surface. Their feet have webbing between all four toes and under water they propel themselves with their feet and wings. 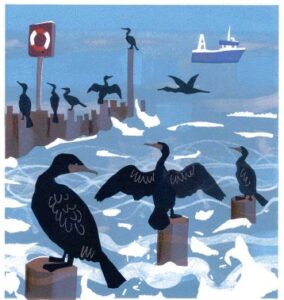 Their blackness and practice of spreading their wings to dry has led to their being an iconic and easily recognisable bird of the sea. A voracious appetite and opportunism has long brought it into conflict with man and so the cormorant has acquired a reputation for greed, bad luck, and evil. Shakespeare used the bird to illustrate gluttony four times in his plays.

Cormorants were there right at the beginning. One of our oldest works, the eighth century BC poem, Homer’s Odyssey, has the hero Odysseus being saved by a sea nymph who takes the form of the bird. 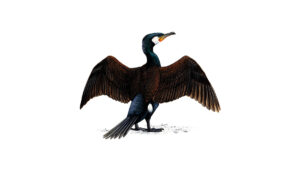 Traditionally, however, they have a negative presence in history, myth, and literature. The Bible has the cormorant on its list of unclean animals. And for John Milton in Paradise Lost, the cormorant becomes the embodiment of evil. Perched atop the Tree of life, Satan took its form as he spied on Adam and Eve during his first intrusion into Eden- the cormorant preceded the serpent.

Often cormorants turn up in human tragedies. In 1860 a cormorant landed on the steeple of St Botolph’s in Lincolnshire. Seeing it as a symbol of bad luck locals had the church caretaker shoot it. It was later discovered a ship – the ‘Lady Elgin’ – was wrecked at the same time – 300 were lost, including a member of the church and his son. Subsequently, a cormorant sitting on a church tower is taken a symbol of bad luck and linked with shipwrecks.

In December 1900 three lighthouse keepers disappeared in mysterious circumstances from the Flannan Isles in the Outer Hebrides. The story was that three black birds were seen flying from the island taking with them the spirits of the dead keepers. 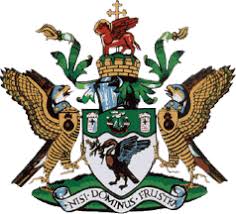 Conversely, they were used in heraldry and medieval ornamentation, that wing-drying pose representing the Christian cross, and symbolising nobility and sacrifice. The most recognisable representation is Liverpool’s Liver Bird which is based on the cormorant. 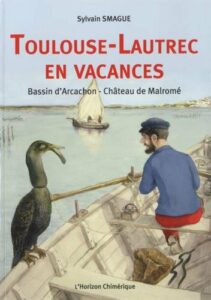 As part of this benign tradition, in Scandinavia they are considered good omens as they are the spirits of those lost at sea visiting their loved ones. They could also bring warnings by unfolding their wings in a protective gesture or as a warning.
Sometimes they can even make a good pet. The famous late-nineteenth-century painter Henri Toulouse-Lautrec own several tamed cormorants.

Whatever their reputation or their deeper meaning, they are special to many. The author Richard J King describes them, “Behold the cormorant: silent, still, cruciform and brooding, flashing, soaring, quick as a snake. Evolution has crafted the only creature on earth that can migrate the length of a continent”.