Health and Care organisations across Torbay have pledged their commitment to carers, the unpaid heroes who support their family members and friends.

A Carer helps someone who has additional needs such as a disability, dementia, mental health or drug/alcohol issues, or a health condition with their daily routine. Some are older couples looking after each other or an elderly neighbour. Some are people who juggle working and bringing up a family plus caring for someone. Many are young Carers, who can be as young as five, who do practical things to help their parent or help with younger siblings.

More Carers in Torbay provide over 100 hours of care a week, than most other areas in England.

Whether they consider themselves to be a ‘Carer’ or ‘just a family member or friend’, all of them benefit from being identified as Carers as early as possible and from being linked into the wide range of available support.

In late 2019, the main Health and Care organisations across Devon agreed to support a Devon-wide Commitment to Carers, but the official launch in March 2020 was cancelled due to the pandemic.

Katy Heard, Carers Lead for Torbay and South Devon NHS Foundation Trust, said: “Unpaid Carers have had a really tough year supporting the people they care for. So many of the organisations in Torbay felt it was important not to delay making their formal Commitments to improving their work with Carers. This is not just the Carers who use their services, but also their staff who have caring responsibilities.”

The individual Commitments to Carers are each organisation’s priorities for Carers over the next three months.

Deborah Kelly, the recently appointed Chief Nurse at TSDFT, said: “Our unpaid Carers have truly been our unsung heroes of this pandemic, supporting people at home when some support services have been restricted. By being named in our Commitment as Executive Lead for Carers, I intend to ensure that our Trust continues to work to support Carers, both those who work with us in supporting people at home, and also the 1 in 4 of our staff who combine both roles.”

Torbay Council launched their commitment recently too, signed by their Interim Chief Executive and their Cabinet Members for Adults and Children’s Services, both of whom attend the Carers Strategy Steering Group.

Councillor Cordelia Law, Cabinet Member for Children’s Services said: “We want to improve our support to Carers, especially during transition to Adult Services, so have committed to undertaking an assessment against the Devon-wide Commitment to Carers Criteria to help us develop an action plan to do this. That plan will then become part of our Torbay’s Carers Strategy.

“It is great to see that Torbay Youth Trust, which provides our services to young Carers aged under 18 has also published their own Commitment to Carers.” 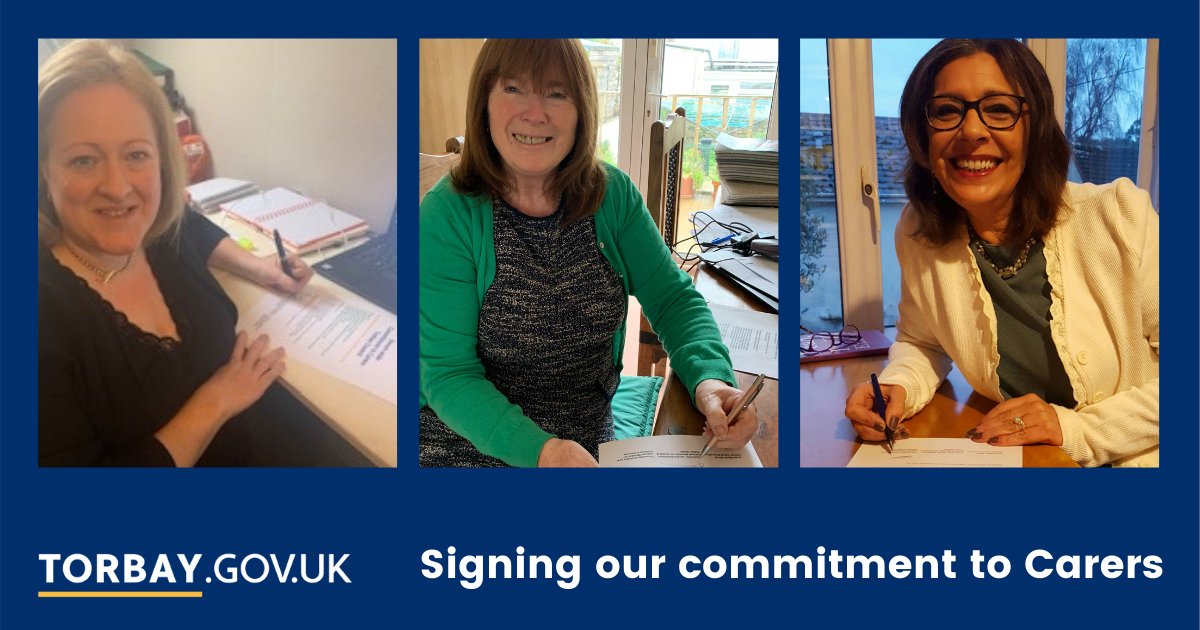 Rohan Davidson, Carers Services Development Manager for the Trust, also praised Compass House Medical Practices for being the first GP practice in Devon to sign a Commitment, saying: “Compass House are always very proactive in their work with Carers, and have been brilliant in sharing their work and templates with other practices. They should be congratulated.”

Information about the Devon-wide Commitment to Carers is on the ‘Together for Devon’ website and, as the various organisations across Devon publish their individual Commitments, they will be uploaded onto the site: www.togetherfordevon.uk/priorities/carers

By the time of the rescheduled public launch during Carers Week in June 2021, it is hoped that many more organisations will have published their commitments.

If anyone thinks that they are, or someone they know might be, a Carer, or would like to give feedback about how to improve Carers Services, then they should contact Signposts for Carers on 01803 66 66 20, signposts@nhs.net, www.tsdft.uk/carers, www.facebook.com/TorbayCarers