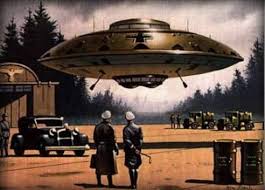 One of the strangest sub-cultures of the twentieth century began with a now-forgotten author who spent his last days in Torquay. Occult and science fiction themes came to be linked together in a bizarre theory than involved a hollow earth, the Nazis, Atlantis and flying saucers. 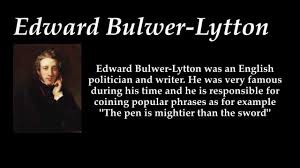 It all began in 1871 when the Torquay author Edward Bulwer Lytton – who lived in Argyll Hall on Warren Road – published a new novel ‘The Coming Race’ which was later reprinted as ‘Vril, the Power of the Coming Race’. 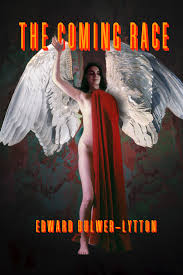 The novel is narrated by a young traveller who accidentally finds his way into a subterranean world. This world is occupied by an angel-like species who call themselves Vril-ya, their main tool being an “all-permeating fluid” called Vril. The extraordinary power of Vril gives the telepathic Vril-ya the ability to heal, change, and destroy. Our hero learns that eventually the Vril-ya will run out of space and invade the surface.

The idea of a subterranean realm is a common one throughout history – the Greek Hades, the Nordic svartalfheim, the Christian Hell, and the Jewish Sheol, for example. Later the eighteenth century Astronomer Royal Edmond Halley believed that unusual compass readings could be explained by the fact that the planet was composed of a hollow shell.

In 1846 the discovery of an extinct mammoth in frozen ice in Siberia was used by Marshall Gardner as evidence of a hollow earth where prehistoric beasts still roamed. He believed the beast to have died recently having escaped from a world beneath our feet. 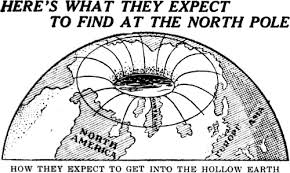 Numerous fiction writers were also inspired by the idea, such as the Tarzan creator Edgar Rice Burroughs (‘At the Earth’s Core’, 1914 and see below), Edgar Allen Poe (‘The Narrative of Arthur Gordon Pym of Nantucket’, 1838) and, most famously, Jules Verne, whose 1864 novel ‘A Journey to the Centre of the Earth’ has been adapted numerous times for stage and screen.

Yet it was Bulwer Lytton’s ‘Vril, the Power of the Coming Race’ that gave birth to a tradition of subterranean super-beings powered by a special fluid. The book became so popular in the late nineteenth century that the term Vril came to be associated with any life-giving elixir. Indeed, Bovril is a blend of Bovine and Vril and in 1891, there was a Vril-ya Bazaar held at the Royal Albert Hall in London. In 1905 there was a stage adaptation which premiered at St George’s Hall in London – it closed after a run of eight weeks.

Bulwer-Lytton developed his ideas about Vril due to his long interest with supposed occult natural forces such as animal magnetism and spiritualism. Though there’s no suggestion that he believed he was writing fact rather than fiction, some occultists did accept the idea that the account of a subterranean master race powered by Vril was partly based on reality. Accordingly, there have been on-going claims that Bulwer-Lytton was a leading figure in a range of nineteenth century occult societies – in 1870, the Societas Rosicriciana in Anglia appointed Bulwer-Lytton as their ‘Grand Patron’. Although Bulwer-Lytton complained about this by letter in 1872, the claim was never withdrawn. 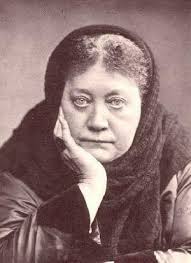 The notion was taken up by Helena Blavatsky (above), the founder of Theosophy, whose books ‘Isis Unveiled’ (1877) and ‘The Secret Doctrine’ (1888) wrote of the Vril power being used by a benevolent racial elite. In ‘The Story of Atlantis & the Lost Lemuria’ (1896) the Theosophist William Scott-Elliot described Atlantean aircraft powered by Vril. This idea would crop up in the late twentieth century amongst UFO believers. 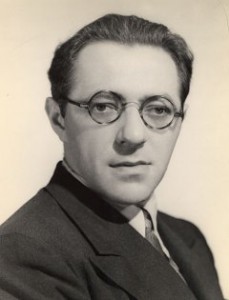 In 1947 Willy Ley (pictured above), a German rocket engineer who had emigrated to the United States in 1937, published an article ‘Pseudoscience in Naziland’ in the science fiction magazine’ Astounding Science Fiction’. He described a Nazi scientific organisation that had supposedly been searching for Vril before the war: “The next group was literally founded upon a novel. That group which I think called itself Wahrheitsgesellschaft — Society for Truth —and which was more or less localised in Berlin, devoted its spare time looking for Vril.”

During the 1950s the former SS member Wilhelm Landig of the Vienna Lodge then came up with the idea of the Black Sun, “a substitute swastika and mystical source of energy capable of regenerating the Aryan race”.

The conspiracy theory further developed in 1960 when a popular book, ‘The Morning of the Magicians’ suggested that a secret community of occultists called the Vril Society operated in pre-Nazi Germany as an inner circle of the Thule Society.

It was apparently working closely with the British Hermetic Order of the Golden Dawn. Claims continue that Hitler sent teams into caves and mines all over Europe and Antarctica to search for occult secrets – note the Indiana Jones movies. These investigative missions are said to have made contact with the Vril-ya and hence the Nazis obtained the means to develop a secret UFO program. 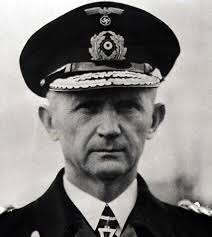 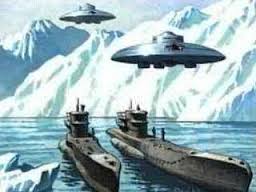 One fanciful story even holds that Hitler and his chief advisers escaped the last days of the Third Reich by going through an opening at the South Pole where they discovered an entrance to the Earth’s interior. According to Hollow Earth ‘experts’ they are still there – including a regenerating Hitler himself, gearing up with Nazi-UFOs and collaborating with the Vril-ya.

There is, unsurprisingly, no historical evidence for any of this. Geology and physics prove that the earth isn’t hollow… Nevertheless, the idea of Nazi occult scientific breakthroughs have inspired many books and theories since the end of the Second World War. 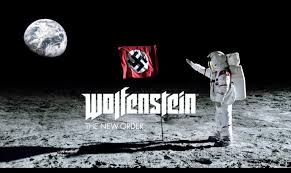 Today the bizarre ideas of a Nazi flying saucer programme and an occult Black Sun are still to be found on the outer reaches of the Web… and have been utilised in computer games such as ‘Wolfenstein’. In movie fiction there’s a long list of hollow earths. Here illustrating the sheer barminess of the idea, for example, is the wonderful 1976 movie ‘At the Earth’s Core’ taken from the novel by Edgar Rice Burroughs :