During the 1930s the cinema was one of the main forms of entertainment in the UK. Even through the war years, and post-war austerity of the later 1940s, cinema going was immensely popular – reaching 1.64 billion admissions in 1946. After this post war peak, however, there was a gradual decline in the 1950s, before a dramatic drop during the 1960s and 1970s. By 1984, annual cinema admissions had fallen to a low of just 54 million.

As with the rest of the country Torquay lost several cinemas due to declining audiences. 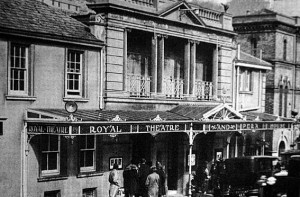 The Regal/ABC opened in 1933 and showed movies till 1971 at Castle Circus. It was demolished in August 1992, to become the Job Centre.

Other cinemas went through a series of rebirths. The Empire Cinedrome in Victoria Road, Ellacombe, offered “cinematograph entertainment” between 1912-1959. It operated again between 1962-1963 as “a cinema showing continental films”– probably not art-house movies we can assume! In the mid-60s the building became The Empire Ballroom – Torquay’s first disco. Then it successively became The Scotch Club, Tiffs in Town in the early 70s, Tiffs Club in 1978, and then Monroe’s.

During the 1970s cinema attendances kept on falling and the film studios fought the attractions of home entertainment by investing in blockbuster movies such as Jaws, Star Wars, and the Bond series. Yet there was another hugely successful British movie genre that helped cinemas to survive for a few more years. These movies, however, have largely disappeared from our collective memory due to the embarrassment of the film critics who saw them as beneath their intellectual level. These were the British sex comedies, the product of the UK’s restrictions on pornography and the unintended consequence of government tax breaks.

The Eady Levy, established in 1957, was a tax on box office receipts intended to support the British film industry. Rather than giving birth to a variety of classics, we saw the emergence of comedy movies with an increasing degree of sexual content. These began with ‘exposés’ of nudism or the sex trade, pretend-educational films designed to get around the censors. Later they became romps in the tradition of the seaside postcard and the music hall. These ranged from the Confessions series to the Carry On films and were usually cheap and largely unfunny. Notably, their treatment of sex was very British and based on embarrassment and the humiliation of the participants rather than on anything remotely erotic.

Nevertheless, they were usually profitable. While not comedies, even the mighty Hammer – themselves fighting diminishing returns on their traditional horror product – tried their hand with a few racy Vampire movies such as The Vampire Lovers, Twins of Evil and Lust for a Vampire:

Though now shunned, the sex comedy was extremely popular at the time. Remarkably, in 1975, Martin Scorsese’s classic Taxi Driver was comfortably out grossed at the UK box office by Adventures of a Taxi Driver, and in 1977 Come Play With Me became one of Britain’s longest-running and most profitable domestic movies:

It’s suggested that the first true British sex comedy starred Norman Wisdom in What’s good for the Goose (1969), to be followed by the penis-transplant themed Percy (1971). These movies weren’t subtle.

Keeping up with the times, the Carry On series added nudity and sex in Carry on Loving, Carry on Girls, Carry on Dick, Carry on England, and Carry on Emmannuelle. Incidentally, there were many unofficial sequels to the original soft-core Emmanuelle (1974). To avoid copyright problems the spelling of the main character was slightly altered. Note the double ‘N’ in Carry On Emmannuelle (1978) which starred Kenneth Williams as the French ambassador to London:
https://www.youtube.com/watch?v=0zo5YsXkjJo
More explicit were the erotic adventures of Timothy Lea in the Confessions series starring Robin Askwith: beginning with Confessions of a Window Cleaner, then… of a Driving Instructor;… Pop Performer; …from a Holiday Camp. This was followed by the Adventures series: Adventures of… a Taxi Driver… Private Eye … and Plumbers Mate:
https://www.youtube.com/watch?v=AWj3Y3cNEyA
The Eday Levy was abolished in 1985, effectively killing off the genre. However, these cheap to make but often extremely lucrative movies sustained British film production at a time when the studio system was in decline. They also provided breaks for many unknown actors who moved on to better things: including Joanna Lumley and, giving a voiceover, Valerie Singleton!

Most of these films are now forgotten. Some occasionally turn up late at night on an obscure channel while most are too sexist, racist, homophobic or just plain awful to put on TV. Indeed, most weren’t even particularly explicit – more nudity and sex can be seen on our screens these days… apparently. Yet, they were a part of our movie-going past whether some of us like it or not…