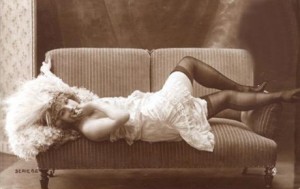 “Who does not know the ‘comics’ of the cheap stationers’ windows, the penny or two penny coloured post cards with their endless succession of fat women in tight bathing-dresses and their crude drawing and unbearable colours, chiefly hedge-sparrow’s-egg tint and Post Office red?” George Orwell, 1941

In early 1914 a ‘Big Meeting of Men’ was held in Torquay Town Hall by the Young Men’s Christian Association. Eight hundred attended to hear a series of speakers, and singing was led by the Free Mission Silver Band. The primary aim of the meeting was to inform Torquay’s young males of the dangers of modern life and to suggest ways of avoiding temptation. The main speaker was Canon Hicks who warned: “In England today there are thousands of men and young men living careless, fallen, perhaps rotten, loose, unclean lives, but they are sick of the lives they are living, and are longing for someone to hold out the hand of brotherhood and give them encouragement to break from the past and find peace with God and make a fresh start.” 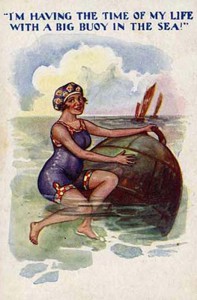 The Canon spoke to those present about the importance of having, “a clean tongue, a clean body and a clean game. I know that very often, when we have special services for men, the very chaps we aim to reach are those who stop away. Sometimes they are afraid to come because they know pretty well the kind of thing that will be spoken. They are rather nervous when the service is over what their chums will say to them. ‘My word! He hit you pretty hard, old chap!’ Those are just the sort of chaps who, thorough you, I want to reach.”

So what were the dangers and traps that awaited the young men of Torquay? Foul language was one: “Swearing was a stupid, foolish, vulgar, and ungentlemanly habit. The biggest fool in Torquay could swear, and the biggest idiot in Paignton could curse, but it needed a man to control his temper and check and control his tongue. If there were any in the hall who were in the habit of using swear words, his advice to them was ‘Give it up, and, by the help of God, keep from it altogether and always’. What was much worse than swearing, was blasphemy. To blaspheme, to take God’s holy name in vain by the use of such common phrases as ‘By God’ and ‘O Christ’, was a terrible sin.”

Women, predictably, were a particular temptation, “Impurity was a foolish and ruinous habit to contract. Hundreds of lads ‘went under’ in the moral life every year either through ignorance or curiosity. Filthy picture postcards often led to a loose and unclean life. Immorality was a cruel habit to form. In Torquay there were thousands of girls and women decking themselves out in bright clothing and donning tawdry jewellery that they might walk the streets and try to attract so-called men and young men. Hundreds of the girls and women would not be living that kind of life today had it not been for the fact that, in some country village or seaside town like Torquay, they had learned to love and trust too well some young men who pretended to court them, only to lead them to their ruin and disgrace. I wish that more could be heard about fallen men and lads.” 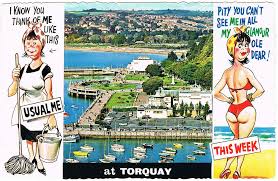 The Canon appealed to the men of Torquay, “to be pure hearted, to have a clean tongue, to be straight, and to do their best to stop the dirty talk and loose living amongst their ‘pals’ and workmates. The growth of betting and gambling, amongst rich and poor alike, was to be deplored.”

As a bulwark against immorality, Canon Hicks recommended “Good, honest, English sport”. Making sure of his own invulnerability, he had subscribed to over one hundred football clubs.

Tragically, the men of Torquay would encounter far greater dangers later that year in a foreign field. 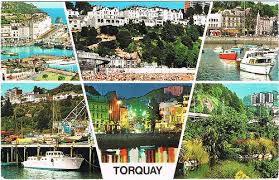 On the topic of filthy postcards, Dr Emanuel Hermann created the postcard in Austria on 1 October 1869. This caused a revolution in the communication of those ordinary messages of no special importance where ‘security’ wasn’t really required. Of course, as with so many new inventions, the smut-merchants immediately became interested and those filthy postcards that the Canon so vehemently opposed were quickly available – see the example at the top of the page. These obviously couldn’t be sent by post but became hidden by collectors for one use or another…

Most of the main developments in the artistic designs of postcard art originated on the continent, in Germany, Austria, France, Italy and Switzerland. One exception – of which we can be truly proud – is that of the saucy postcard which originated in Britain. This may have something to do with our odd attitude to sex which can also be seen in the Carry On films and Benny Hill. 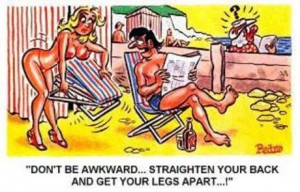 In the early 1930s, cartoon-style postcards became widespread and at the peak of their popularity 16 million a year were sold. One continuing theme was the innocuous ‘look where we are on holiday’ type – as in the examples above – but others were often bawdy and made use of innuendo, double entendres and featured a lot of vicars and Scotsmen. The limited space was a blessing to those with poor spelling or with little to say. 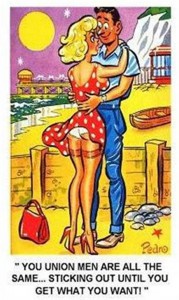 In the early 1950s the newly elected Conservative government was concerned about the apparent deterioration of the nation’s morals. As sexually explicit postcards were seen to be a part of the problem, Watch Committees were consequently set up in seaside resorts. There were then a number of prosecutions under the Obscene Publications Act of 1857, including some in Torquay. This largely ended the saucy postcard business for a number of years. Intriguingly, there is some suggestion that the Police and Magistrates were stricter in Torquay than Paignton as the Queen of the English Riviera was seen as being somehow more deserving of moral protection than its working class-friendly neighbour.

In the more liberal 1960s the postcard came back. On the other hand, during the 1970s the humour and quality of the artwork declined – as can be seen here. This caused some distress to Torquay’s tourist industry who wished to promote the resort as a bastion of good taste in comparison to its competitors such as Blackpool and Great Yarmouth. With changing attitudes and the march of technology, the postcard has since declined in use, though the occasional example of old fashioned British filth and smut can still be seen around the Harbour if you look hard enough…